Govt should accord industry status to film sector : Study 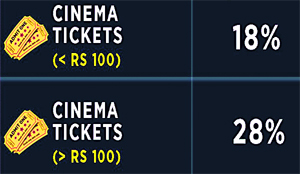 Agencies, Hyderabad, The Government must do away with imposition of any levy in addition to the highest tax rate of 28 per cent Goods and Services Tax (GST) on movie tickets (costing over Rs 100) and accord industry status to the film sector for inclusive growth of media and entertainment sector, suggested a just-concluded ASSOCHAM-PwC joint study. “While the GST legislation classifies access to cinema as a luxury and puts it under the highest tax rate of 28 per cent (tickets costing above hundred rupees), but considering the socio-economic developments round the world, the cinema may not really be a luxury, at least in metro cities,” noted the ASSOCHAM-PwC joint report titled, ‘An overview of the impact of GST on film industry – what, why and how.’ Currently under GST, tax at the rate of 18 per cent is levied where the price of tickets is Rs 100 or less and 28 per cent in other cases. Also, the municipal and local bodies are allowed to levy a parallel entertainment tax along with GST, which may vary from state to state. The levy of LBETs (Local Bodies Entertainment Tax) is at the discretion of the states, It said. In his address at the ASSOCHAM press meet here on Thursday, Mr M Srinivas, Commissioner, Medchal GST Commissionerate said that GST which will shortly complete one year of its implementation has been a huge success. “We are proud that all stakeholders have contributed for grand success of its implementation.” Highlighting the major aspects that speak about the big success of GST, Mr Srinivas said, “The tax base was hardly 70 lakh assesses of state and centre prior to GST implementation, today it is over 1.1 crore and this is a clear 50 per cent raise in the tax base.” He also said that most of the stakeholders and businessmen who conduct any activity which attracts GST are convinced that being a part of the GST net is beneficial and their total tax liability is extremely low. “Second, compliance levels are growing by leaps and bounds and have seen rapid increase,” he said. He added that the tax return filing and the time before which they are being filed has seen a rapid change. “We are extremely happy that in Telangana the return filing is over 70 per cent, in the earlier tax regime the service tax threshold was just 10 lakhs and in the GST it is 20 lakhs.” Terming the collection of tax from customer and not paying it to the government as a very serious offence, he said, “If that situation continues for a period of three months or more then penalty provisions are very-very strong and even prosecution can be launched so it is going to be very difficult for the people who are delaying filing even after collecting the tax.” He also informed that there is a long list of tax evaders and prosecution has been launched in some cases, however till date there has been no case of tax evasion in Hyderabad region. Discussing the impact of GST on Indian cinema, Anita Rastogi, Partner Indirect Taxes, PwC India said, “Whether commercial or art, regular or short, every piece of cinema, goes through the process of making it, and the whole value chain involved in its production, needs to ensure that GST (a transaction tax) is rightfully complied with at each level.” Frank D’Souza, Partner and Leader Entertainment and Media, PwC India said, “The inherent potential for growth of Indian Entertainment & Media Sector, amongst others, is predicated on an investor friendly and sector specific tax friendly policies.” Sharing his views on the issue, ASSOCHAM’s Secretary General D.S. Rawat said, “Given the amalgamation of various taxes, including entertainment tax and seamless credits, one may wish to see a commensurate reduction in the prices of movie tickets.” He also suggested the government to rationalise 28 per cent GST rate on movie tickets, as done for amusement parks. Mr KV Rao, Chairman of the ASSOCHAM National Council on Media & Entertainment and Director, Sri Sarathi Studios said, “While the GST in M&E industry would facilitate easy tax process, however there is a need to review the tax structure by involving more and more stakeholders.”