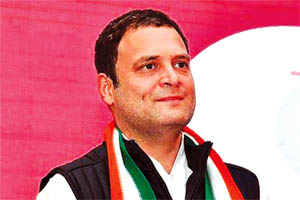 Agencies, New Delhi Reacting to the Union Budget for 2018-19 , presented by Finance Minister Arun jaitley in the Lok Sabha on Thursday, Congress president Rahul Gandhi said four years after being in power, the Government was still promising a fair price for farmers and coming up with ‘fancy schemes’ with no matching budgets. Taking to twitter, Rahul , referring to the promise in the budget to farmers to provide an MSP of 1.5 times the price of their produce , said,’4 years gone; still promising farmers a fair price. 4 years gone; fancy schemes, with no matching budgets. 4 years gone; no jobs for our youth. Thankfully, only 1 more year to go.’ The Finance Minister unveiled the NDA governemt’s fifth Budget in the Lok Sabha which promised to farmers MSP of 1.5 times the prices of their produce besides announcing a plethora of schemes for the benefit of the farmers, women and senior citizens. The Congress has been attacking the NDA government ever since it came to power for its failure to provide an MSP of 150 per cent of the cost of their produced, as promised by Mr Modi during the Lok Sabha elections in 2014. Earlier in the day, Mr Gandhi had failed to respond to media queries about the budget, after the General Budget of 2018-19 was presented by Finance Minister Arun Jaitley,As soon as Mr Gandhi came out of the Lok Sabha , the mediapersons surrounded him and asked the Congress President to give a feedback on the budget but he ignored them and did not respond to their volley of questions.