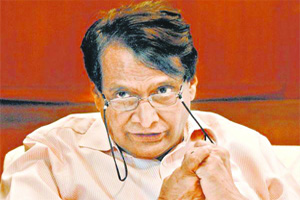 Agencies, New Delhi Commerce and Industry Minister Suresh Prabhu said on Monday that Government is working on the idea of incentivizing states who will contribute substantially in promoting export from their states. Briefing media persons after the inauguration of 3rd Meeting of the Council for Trade Development and Promotion here today, Mr Prabhu said that the idea came in during the meeting and government will see how we can incentivise the states. Mr Prabhu said, “In true spirit of cooperative federalism we are working with the states to promote.” Mr Prabhu added, “We are working on a strategy to boost ‘Make In India’, so as to increase share of manufacturing in India’s GDP.” He informed that 14 states have already prepared strategy for the export promotion whereas other states are working on it and will come out with the strategy. Mr Prabhu said, “We are thinking of making districts as a unit for the purpose of promoting exports as if districts promote the export it will add to states and if states promote exports, it will add to the nations growth. Earlier, addressing the 3rd Meeting of Council of Trade Development and Promotion, Commerce and Industry Minister called upon states to explore ways of tapping into global trade pegged at 5 trillion dollars by promoting services exports, organic farming, value addition to agricultural products, utilisation of the benefits accorded to the Special Economic Zones (SEZs) and creating employment. The Minister further said that a new agricultural exports policy is required that lays focus on increasing exports of value-added agricultural products so that farmers can access international markets and increase their income. Mr Prabhu released a study “LEADS-Logistics Ease Across Different States” which is a first ever sub-national logistics performance index. He also released the “State Exports Booklet” which is a compendium, of the status of exports from the States over the last 10 years. The Chief Minister of Goa, Deputy Chief Minister of Gujarat, Ministers from 11 states, senior state government officials and industry bodies attended the meeting. Manohar Parikkar, Chief Minister, Goa said that all states need to prioritise exports by drafting an export policy and to look at the primary, manufactures and deemed exports to achieve their full potential. He drew attention to the imposition of the 5 per cent duty on import of raw cashew.