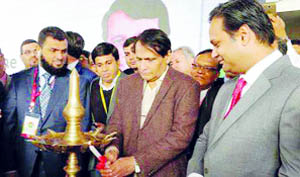 Agencies, New Delhi Union Minister for Commerce and Industry Suresh Prabhu said on Thursday that the government is working on a strategy on the diversification of India’s export basket in a bid to enhance its export presence in the top items of world trade as well as to increase the country’s outbound shipments, both in value and quantity. “We are working on a marketing strategy to diversify the export basket and we will offer it to the industry. The government is committed to increase the ease of doing business and make India a leading destination for various products and services in the world,” Mr Prabhu said while inaugurating ‘Indus Food’ – a Mega International Food and Beverage Tradeshow at India Expo Mart In Greater Noida. Indus Food is witnessing participation from over 400 exhibitors including representations from over 12 states and Departments. Global buyers from 43 nations are also participating in it. The event is expected to provide a robust platform for Indian exporters to access global market without having the trouble of going to overseas trade fairs. During his inaugural address, Mr Prabhu said, “This trade show is being positioned as the next global Food and Beverages (F&B) market in the Asian Sub-continent like ANUGA, SIAL and Gulf food. This year we have covered sectors such as processed food, Dairy, Fruits & Vegetables, Meat, Seafood, Spices, Tea/coffee, Ingredients, Pulses and Grains. We aim to include more items in the next edition.” The Minister informed the delegates at the who that the Commerce Ministry is formulating an aggressive Agri Export Policy and will hold consultations with the public and the stakeholders in the next few weeks. “My Ministry has plans to introduce measures with a view to further facilitate the trade in this sector’s products. The Government has established 60 fully equipped Agri-Export Zones (AEZs), in addition to 42 mega food parks and 128 cold chains, to boost agricultural and food processing exports. In other words, there is a great potential to conduct business in India as the Centre of South East Asia as a trading hub in F&B sector,” Mr Prabhu noted. To promote food exports, Trade Promotion Council of India (TPCI) is being supported by the Department of Commerce in hosting one of the largest buyer-seller meet in the food segment in India. Many top personalities, including Iran’s Deputy Minister of Agriculture, Ali Akbar Mehrfard, Saif Sultan Al Sheibany, DG Public Authority for food Reserves of Oman, Al Kafeel religious trust of Najaf & Karbala of Iraq are participating in this international expo. On the government’s efforts to increase farmer’s income, Mr Prabhu said, “Agri-product export strategy will change the export scenario in the country. Not only will it double the farmers’ income, but also give them a choice of so many buyers to sell their produce. I’m sure it will benefit all farmers, whether big or small. Indus Food is a very good step in that direction”. In terms of market size, the Indian food market was worth 193 billion dollar in 2016 and is expected to cross 540 billion dollar by 2020. The sector has been growing at the rate of 12 percent annually, which is almost double the growth rate of GDP. Country’s food processing industry is expected to reach 482 billion dollar by 2020. The Food Safety and Standards Authority of India (FSSAI) has plans to invest about 72.3 million dollar to strengthen the food testing infrastructure by upgrading food testing laboratories and setting up new mobile testing labs.