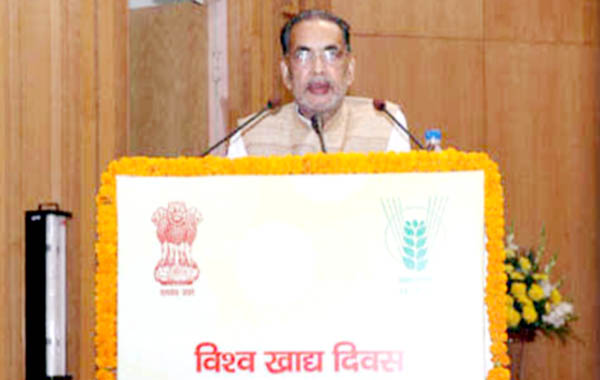 New Delhi, Union Minister for Agriculture and Farmers Welfare Radha Mohan Singh on Tuesday said that the government was working towards the goal of Zero Hunger in a phased manner. Inaugurating a Conclave here on Agri Start-ups and Entrepreneurship on the occasion of World Food Day, he said the efforts of farmers and the techniques developed by the Indian Council of Agricultural Research (ICAR) had contributed to increase agricultural production and food security. The purpose of celebrating the World Food Day this year is to demonstrate India’s global commitment to achieving the goal of creating “Zero Hunger World” by 2030. In this context, the Minister said that the fourth advance estimates, put foodgrains production at 284.83 million tonnes in 2017-18. The production of pulses has shown a significant jump from16.25 million tonnes in 2014-15 to 25.23 million tonnes in 2017-18. Likewise, horticulture crops, which contribute significantly to nutritional security, have witnessed record production this year at 307 million tonnes. The role of high quality crop variety, seed and technology have made significant contribution to enhancing production, the Minister said. He said the government has launched start-up and stand-up programmes to create an atmosphere for agri start-ups, wherein efforts are made to provide appropriate support and environment for setting up enterprises. To attract the youth of the country to agriculture, a project called 'Arya' is being implemented through Krishi Vigyan Kendras. The Farmer Fest program was also playing a leading role in this direction. "There is tremendous potential for start-ups in the field of seeds and plant production, food processing, post-harvest management, veterinary, farm machinery, poultry, fish production and biological products,’’ Mr Singh said. There is a potential for 22 lakh skilled youth in the country for which the KVKs and ICAR were conducting training programmes. "The Modi Government has encouraged entrepreneurs through skill development and start-ups, the result of which is that we are discussing these topics on the World Food Day,’’ the Minister said. "A record foodgrains production has been achieved, but the government is working fast on the value chain and therefore the Prime Minister Kisan Sampada Yojana has been started, under which agriculture entrepreneurs can establish processing units for value addition,’’ he added.