Govt’s word on its own accounting system must never be questioned: Jaitley 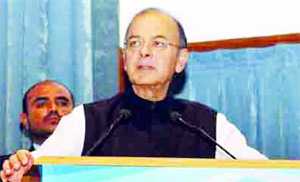 Agencies, New Delhi Finance Minister Arun Jaitley said on Thursday that the Government’s word on its own accounting system must never be questioned. While Inaugurating Government Pension Fund (GPF) and Employees Provident Fund Organisation (EPPO) Modules on 42nd Civil Accounts Day, Finance Minister Jaitley said that there is a certain amount of sanctity which must remain attached to the Government Accounting System. The Government’s word on its own accounting system must never be questioned. Finance Minister said that Government Accounting System needs to be error free since the Government informs the Nation on the State of Public Finances. Delivering the Inaugural Address at the 42nd Civil Accounts Day function here in national capital, Mr Jaitley said that while there are Government Departments that can function with a fairly high amount of accuracy, the Civil Accounts Department is one that cannot afford to err because a small error can lay a huge foot prints. He further said that the accounts need to be error free since the Government informs the nation on the state of public finances. Therefore, the Finance Minister said that sanctity of work is important and involves high level of efficiency which adds to the integrity of the Government. He said that the Accounting System should never come under questioning and in this regard, he is happy to note that the sanctity and credibility of the Accounting System and the Organization has been maintained over the years. The Finance Minister appreciated the effective use of technology and the tools employed by the CGA organization and Indian Civil Accounts Service in particular which has made this transformation possible. Through this use of technology, he said that every rupee of the Government is accounted for and can be tracked which adds up to the overall efficiency of the Government, and also leads to the effective utilization of Government money. The Finance Minister expressed his happiness that the Accounting System has also been fully integrated with the GST Network, the RBI and the banks which has been instrumental in providing timely and reconciled reports on collections of CGST, SGST and IGST etc. Mr Jaitley also expressed his satisfaction that Indian Civil Accounts Service (ICAS) has been able to successfully bring about the important changes and contributed to the changes in Government functioning. On the occasion, he also inaugurated the Centralized GP Fund Module of PFMS for all the Central Government Employees and ePPO module of PFMS for complete end–to–end electronic processing of Pension cases. The centralized GPF module meets a long standing demand of the Central Government Employees for a mapping of GPF Accounts with the unique Employee ID thereby facilitating online application for GPF advances and withdrawals with online access to the employee’s current GPF balances. The module will streamline GPF accounting and transfer of balances. The ePPO meanwhile includes the integration of the BHAVISHYA application of the Department of Pension & Pensioners’ Welfare and the PARAS application of CPAO with PFMS for seamless processing of Pension cases thereby eliminating delays and errors involved in manual processing.