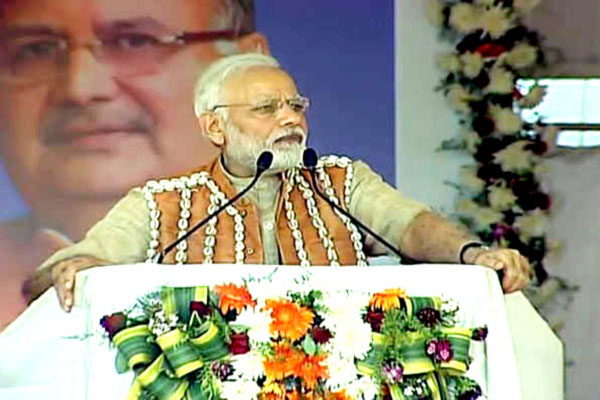 Jangla, Chhattisgarh, Prime Minister Narendra Modi today said that the Gram Lok Suraj campaign will be run in the whole country till May 5. Mr Modi made the statement while inaugurating the Ayushman Bharat Yojana at Jangla village in Chhattisgarh's Bijapur district. He said that he has come to launch the Ayushman Bharat Yojana's first phase and the Lok Suraj campaign. On the occasion, the Premier laid the foundation of several other schemes worth crores of rupees. Besides, he flagged off a new train from Bhanupratappur through video conferencing. He launched the Vandhan Yojana, unveiled a new dialysis machine in the district and construction of 1,882-km roads to be built at a cost of Rs 1,703 cr besides construction of bridges over the Indravati River and the Mingachal River. “By 2022, a model school would be built in every block of the country where tribal population is more than 50 per cent. A grand museum would be built for tribal freedom fighters. In all the districts of the country, the rule providing for allocation of a part of the income from mining to local tribal folk has been implemented,” said Mr Modi. Mentioning that Bijapur used to be regarded as a backward area once, he said that the district has earned a recognition across the country due to the pace of development and by courtesy of central schemes. “There were only two medical colleges in Chhattisgarh, but now the figure has reached to 10,” he said. Pointing out that bamboo had earlier been placed in the category of trees making its cultivation impossible, the Prime Minister said that the relevant law has been amended enabling its cultivation and use. He mentioned about availing loans without bank guarantee under the Bank Mitra, the Post Office and the Mudra schemes. Chief Minister Raman Singh also addressed the gathering.