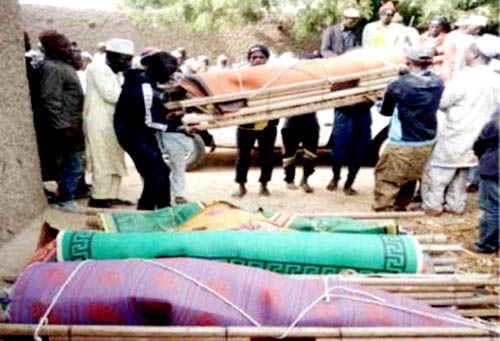 Abuja, At least 25 people were killed and over a dozen others wounded following an attack by unidentified gunmen in three communities in Nigeria's northern state of Zamfara, reports received here said on Friday. The attack in Birnin Magaji local government area of Zamfara on Wednesday is the latest in a series of onslaughts by gunmen in Nigeria's northwest region in the past six months, Xinhua said in a report. Local residents said most of the victims were working on their farms, harvesting sweet potatoes, when the gunmen struck, shooting sporadically. The local ThisDay Newspaper reported that most of the victims of the attack were young people. "In the attack, 12 people were killed at Garin Haladu community. At Nasarawa Godal community, four persons were killed, while at Garin Kaka community, nine people were killed," local media reported. Residents are still searching for more bodies in nearby bushes, said Ibrahim Galadima, a local youth leader. The Birnin Magaji area is the hometown of Nigeria's Defense Minister Mansur Dan Ali.Troops have been deployed to the area, according to local officials.Local police told Xinhua on Friday that they have recovered five bodies in one of the communities, following the deployment of riot police to the area. Muhammad Shehu, a spokesperson for Zamfara police, said the area has been subjected to extensive bush combing to prevent further attacks. Hundreds of people have been killed by gunmen in attacks in Zamfara this year.