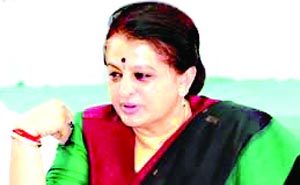 Chronicle Reporter, Bhopal Minister for Women and Child Development Smt. Archana Chitnis has said that it is essential to provide information about the philosophy, sacrifice and values of Chhatrapati Shivaji and Guru Govind Singh Ji’s life to the new generation. She was addressing the inaugural session of a 4 day long programme being organized on the 350th birth anniversary of Guru Govind Singh Ji at Burhanpur. The programme begun with the address of the National Secretary of Bhartiya Shiksha Mandal, Mukul Kanitkar on the subject ‘Hindvi Swaraj evam Khalsa se Ek Akhand tatha Samraddha Bharat. Smt. Chitnis informed that live Shobha Yatra of Bhakti, Shakti and Sanskriti will be conducted in the prakash of Chhatrapati Shivaji and Guru Govind Singh during the 4 day programme. Moreover in this series, a grand play Shrimant Yogi will be showcased at Shahpur and Burhanpur on February 21 and 22 respectively. Addressing Vichaar session organized at historical Tilak hall, the main speaker, Kanitkar mentioned that Chhatrapati Shivaji and Guru Govind Singh Ji aroused the feeling of duty and sacrifice among the citizens. He further stated that Shivaji’s Guerrilla warfare policy is taught to the American defence force during the training. Shivaji has won many major battles with his small army. Her mother Jijabai is still an inspirational source for mothers. Her methods of raising children to make them brave and courageous are still relevant today. Kanitkar elaborated on the great sacrifice of Guru Govind Singh made to protect the country and religion. Smt. Chitnis expressed gratitude towards the Prime Minister Narendra Modi for making a separate provision of budget allocation to celebrate the 350th birth anniversary of Guru Govind Singh at grand level. She said that life of Shivaji and Guru Govind Singh cannot be bind in the perimeter of caste, country and religion. Shivaji’s state was small but his thinking was boundless.