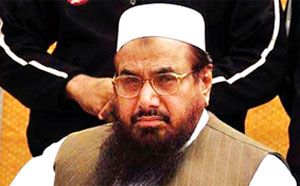 Agencies, Lahore A founder of a Pakistani militant group blacklisted by the United Nations for terrorism said on Tuesday he had filed a court petition to halt government plans to seize control of his charities. Hafiz Saeed is the founder of Lashkar-e-Taiba (LeT), or Army of the Pure, blamed by the United States, India for four days of shootings and bombings in Mumbai in 2008 that killed 166 people. LeT, Saeed and charities that he controls are all included on terrorism blacklists by the U.N. Security Council and the United States. He denies any role in the Mumbai attacks and says he and his charities have no links to militants. Prime Minister Shahid Khaqan Abbasi said on Monday his government will push ahead with a plan to take control of charities linked to Saeed. Pakistan’s government placed Saeed under house arrest a year ago, but he was released in November after a court ruled there was no evidence to hold him. Under pressure from the United States, United Nations and international institutions to crack down on terrorist financing, Pakistan drew up secret plans in December for a “takeover” of charities linked to Saeed. The United States calls Saeed’s charities — Jamaat-ud-Dawa (JuD) and the Falah-e-Insaniat Foundation (FIF) — “terrorist fronts” for LeT, which Saeed co-founded in 1987. Pakistan’s plans to seize the assets were drawn up ahead of a U.N. Security Council team visiting Islamabad this month to review the country’s progress against blacklisted groups. “We have filed a writ petition in the high court regarding these news which are going on in the media about the government’s measures (against us) or the United Nations delegation arriving here.”Saeed said in a press conference in the eastern city of Lahore where his charities are based. He said any government moves against him would be carrying out the will of the United States and India.Saeed’s freedom in Pakistan, where he holds public rallies, has been a thorn in Islamabad’s relations with India and the United States. Saeed said the charities broke no laws, and offered to allow the U.N. team to visit projects they run.“Any delegation from any corner of the world can visit there,” he said. “All of our work across Pakistan can be checked. We are not doing anything illegal.”