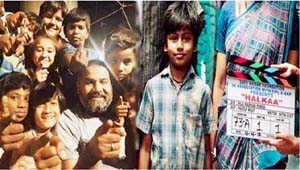 Mumbai, After winning the Grand Prix De Montreal at the 21st Montréal International Children's Film Festival, Nila Madhab Panda’s next feature, Halkaa bags another Grand Prix for the best film at the Kinolub Festival for Children and Youth, Poland. The jury stated while presenting the award, “We awarded the Grand Prix to the film Halkaa for courage in undertaking a difficult subject and presenting it in an original and light way, accessible to the young viewer. The added value for the Polish audience is the opportunity to learn about the realities of living in a culturally remote country.” Halkaa (Relief) is a unique take on a slum child's heroism, aspirations and dreams. The child protagonist, Pichku fights for the basic problem that he faces everyday; defecating in the open amongst others. It is his dream to make a toilet of his own where he can enjoy his privacy and do the deed in peace. The light-hearted film features child actor Tathastu as Pichku, and Ranvir Shorey and Paoli Dam essay the role of his parents. National-Award winning director of Kadvi Hawa and I am Kalam, Nila Madhab Panda said, “It is indeed a proud moment for us to receive Grand Prix for the second time within months. We are planning to release the film in India on August 31st and hoping to get the same kind of love from Indian audience.” "Halkaa has become the toast of the international film festivals. We are proud to see the film traveling to many film festivals around the world.” The director adds with pride. Halkaa is selected at many prestigious international children’s film festivals this year including 58th International Film Festival for Children and Youth. It included Czech Republic, International Film Festival SCHLINGEL, Germany, Tel Aviv Int'l Children's FF, Israel, Buster in Denmark. Presented by Shiva Nadar Foundation and produced by Roshni Nadar Malhotra in association with Akshay Parija and Nila Madhab Panda, Halkaa is set to release on August 31.