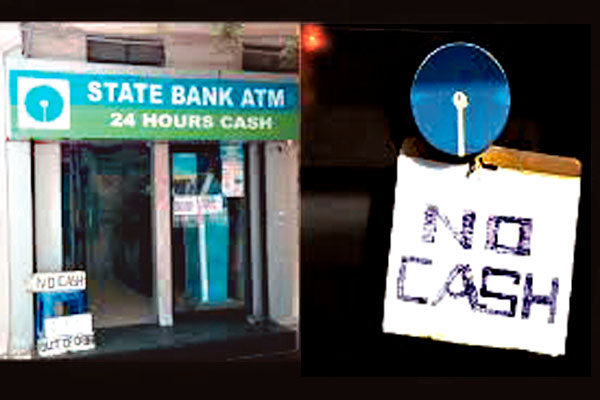 Printing of notes at 4 presses stepped up, says RBI

Agencies, New Delhi The Reserve Bank of India (RBI) on Tuesday clarified that there is sufficient cash in RBI vaults and currency chests. The RBI clarification came in the wake of reports that there is shortage of currency in many parts of the country and ATMs have dried up. The Central Bank said shortage may be felt in some pockets largely due to logistical issues of replenishing ATMs frequently and the recalibration of ATMs being still underway. “RBI is closely monitoring both these aspects,” it said in a statement. However, to meet the shortage of cash, RBI has ramped up printing of notes in all the four presses, it said. In the last few weeks, many ATMs have gone dry in states including Telangana,Andhra Pradesh, Karnataka, Bihar, Maharashtra, Madhya Pradesh and parts of Delhi. The government and RBI officials attributed the shortfall to unusual demand for cash in a few states and instructed banks to improve their cash management. Earlier in the day, Finance Minister Arun Jaitley assured that there was more than adequate currency in circulation and plenty was available with banks. “Have reviewed the currency situation in the country. Over all there is more than adequate currency in circulation and also available with the Banks. The temporary shortage caused by ‘sudden and unusual increase’ in some areas is being tackled quickly,” Mr Jaitley said in a tweet. However, as a matter of precaution, RBI is taking steps to move currency to areas which are witnessing unusually large cash withdrawals, the banking regulator added. An estimated 10-12 percent of the total ATMs are facing cash crunch. The government estimates the situation will normalise in the next week. RBI and government have formed committees in states to ensure adequate stock of currency. The supply of Rs 500 and Rs 200 notes will be stepped up in the next few days, officials said. The Finance Ministry said there was adequate stock of currency notes of all denominations, including of Rs.500, 200 and Rs.100 to meet any demand and assured that it would be supplying adequate currency notes to meet even higher levels of demand if such demand were to continue in the coming days/months.