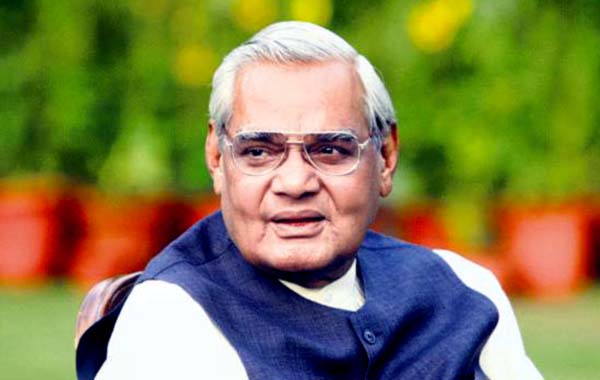 Azhar Hashmi Bharat Ratna Atal Bihar Vajpayee (94) and I were ‘Guru-Bhai. Yes, Poet, Writer Dr Shiv Mangal Singh ‘Suman’ (late) was our teacher. Suman taught Atal Bihari Vajpayee in Gwalior (MP) in the year 1940 and he taught me in Madhav College, Ujjain in 1966. Then in 1966-67 Dr Shiv Mangal Singh ‘Suman’ had been the principle of Madhav College of Ujjain. Regardless of the administrative duties of the principal post, he used to come to teach BA Hindi literature one day in a week, that class of which I was the student. If the then Principle Dr. Suman of Madhav College of Ujjain had not taught me, in 1966-67, the verse paper of Hindi literature then I could not be write that Atal and I was the Guru-Bhai. Having been successful in managing and maintaining his brilliant image on the parameters of ethics by entering politics from 1957, Atal Ji gave important creations such as ‘Meri 51 Kavitae’, ‘Qaidi Kavirai Ki Kundliyan’, ‘Amar Balidan’, Mrutyu Ya Hatya’, ‘Secularwad’, ‘Raajneeti Ki Rapteeli Rahen’ while serving Hindi. His book ‘Loktantra Ke Ayaam’ on parliamentary life invites. Energetic in speech and thought/Sensitive human to sacrament and behavior/Powerful on the surface of ethics/Father of pure politics, Atal Bihari Jee Vajpayee has unveiled the new horizons of poetry, I believe that former Prime Minister Atal Bihari Vajpayee that did not have any paragon in terms of humorousness and spot reply, is the ‘Poetry Recitation School’. Now the two memoirs associated with Atal Jee are presented. First memoir was of 18 April 1989, when I had been invited as a convener and Poet Dr. Rajkumar Chaturvedi ‘Chanchal’ (classmate of Atal Bihari Vajpayee) for poetry in the poetry gathering, organized on ‘Tatya Tope’s martyrdom’s day at Shivpuri MP. ‘Chanchal’ had a deep study in Astrology and I was also interested. Therefore, for astrological discussion and due to intimacy he used to make me stay in his house which was located at 12 Shivpuri MP. It is notable that ‘Chanchal’ and Atal Bihari Vajpayee used to talk every day on telephone in 1989. When on 18th April 1989, ‘Chanchal could not call Atal Jee at the appointed time the Atal Jee telephoned to ‘Chanchal’. At that time while discussing on astrology, I was viewing the lines of palm of ‘Chanchal’ Jee’s youngest daughter Kamna Chaturvedi. My eyes were focusing on the lines palm of Kamna Chaturvedi but my ears were on the talks going on between ‘Chanchal’ and Atal Bihari Vajpayee. That was indecency but that indecency paid me a lot. ‘Chanchal’ Jee told Atal Bihari Vajpayee that ‘Poet Azhar Hashmi is here, do you like to talk to him he is a good astrologer and palmist too. When Atal Jee permitted, ‘Chanchal’ Jee handed over the receiver of the telephone to me. It was the thriller moment for me. I said “Pranam Pandit Jee”, from the other he accepted my wish. He did not ask any question regarding astrology but he asked me to say some poem or song. (I narrated ‘Hai Agar Vishwas to Manzil Milegi). He praised. On my request, Atal Jee narrated some line of the poem ‘Qaidi Kavirai Kee Kundliyan. This was my achievement. Second memoir was of the Poetry gathering, organized at Lal Qila in national capital by Delhi government on 22nd January 1995. Which was inaugurated by Shankarrao Chauhan (then cabinet minister), chief guest of the program was Atal Bihari Vajpayee (then Member of Parliament). President ship was done by Madan Lal Khurana (then Chief Minister of New Delhi government). As a proof of the program, one card is enclosed. My name with Atal Jee in a card of Poetry conference is itself a memoir.