Health of girls should be examined for protection from malnutrition: Governor 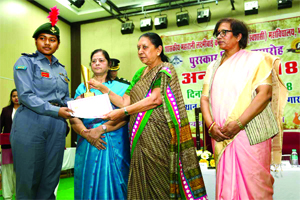 Chronicle Reporter, Bhopal Governor Smt. Anandiben Patel said that apart from ensuring quality education in every college, a yearly health check up of girls should be conducted, particularly a blood test to check haemoglobin count so that they can be protected from malnutrition. Our meal should include all kinds of nutrients; lack of proper food intake can lead to several diseases. The Governor was addressing the gathering at the annual function of Government Maharani Lakshmi Bai Girls Autonomous College today. On the occasion, Smt. Patel distributed prizes to several students including Shankar Dayal Sharma Gold Medal to B.Sc student Kum. Sumaiya Ali, Mukhya Mantri Gold Medal to M.Sc student Kum. Nida Naaz, Usha Jain award to BHSc student Kum. Zainab Modi. Governor Smt. Patel said that complete nutrition is needed to become a good mother. It is the responsibility of the mother to ensure good education to her daughter apart from giving birth to her. She said that the ‘Beti Bachao-Beti Padhao’ campaign has been introduced in the whole country. Today the society is moving fast ahead; women are becoming more aware and the incidents of female foeticide have reduced. It seems that the population of women by the next Census will be at par with men. Women are capable of doing more work than men. Today women are advancing in difficult areas like defence forces along with political, administrative, social areas. Stressing on awareness campaign against open defecation the Governor said that the tendency to defecate in the open has been causing several untoward incidents. Hence, people should be inspired to construct toilet in every house in the villages. Principal Dr. Romsha Singh enlightened on the activities of the college. She told that several students of the college have been selected in multinational companies. The programme was conducted by Students Union in charge Dr. Urmila Shirish and President of the Students Union Kum. Ulfa Khan proposed the vote of thanks. The Governor dedicated a book written by Dr. Bhavna Shrivastava.

Tribal folk art must be in the reach of common man

Inaugurating a tribal painting workshop at Raj Bhavan here today Governor Smt. Anandiben Patel said that tribal folk art should be included as an additional course in schools and competitions should be organized on this art. She said that there is need to take tribal folk art to the reach of common man and publicize it. The Governor drew a ‘Swastik’ and inaugurated the workshop. The workshop which will continue from February 15 to 23 at the Kshipra Guest House at Raj Bhavan premises has been organized by Department of Culture, Adivasi Lok Kala Parishad and Tribal Folk Art and Dialects Development Academy, Bhopal. Ten Bhils and 10 Gond tribe artists will exhibit their paintings at the workshop. The workshop will be open from 11 am to 6 pm. Principal Secretary to the Governor Dr. M. Mohan Rao, Principal Secretary Culture Manoj Shrivastava, Commissioner AYUSH Smt. Shikha Dubey, Director Akshay Kumar Singh, Coordinator Tribal Museum Ashok Mishra and Director Smt. Vandana Pandya were also present on the occasion.