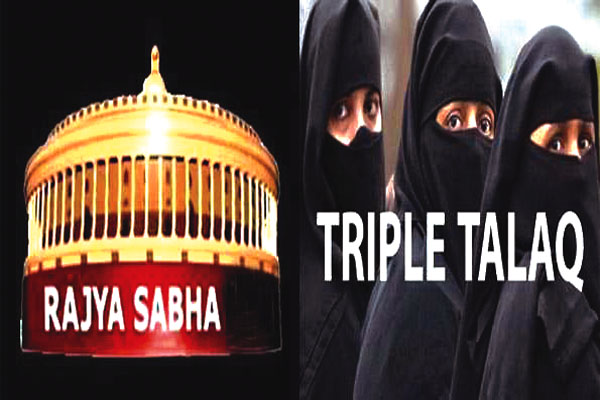 Agencies, New Delhi After a smooth passage in the Lok Sabha, the Triple Talaq Bill was on Wednesday tabled in the Rajya Sabha amid a ruckus by the Opposition, which unitedly demanded that the Bill be referred to the Select committee of the Upper House. The Muslim Women (Protection of Rights on Marriages) Bill, 2017 was introduced in the House by Law Minister Ravi Shankar Prasad. However, even as the Law Minister introduced the Bill, the Opposition raised an uproar in the House, demanding that the Bill be referred to a Select Committee of the Rajya Sabha. Stressing the urgency of passing the Bill, Mr Ravi Shankar Prasad said, ‘even after passage of triple talaq bill in Lok Sabha the practice is continuing, a woman in Moradabad was given instant talaq over dowry.’ However, agitatted member of the Opposition did not allow the Law Minister to speak on the Bill, pressing their demand for referring the Bill to the select committee. Infact, in the midst of the din in the house, Deputy leader of the Congress Anand Sharma moved a notice demanding the triple talaq bill be referred to a select committee for further consideration. ‘The House respects the dignity of women but the Bill needs further consideration,’’ he said and also suggested for the committee names of Renuka Chowdhury and Vivek Tankha of the Congress, Derek O’ Brien of the All Indian Trinamool Congress, Majid Menon of the NCP, D Raja of the CPI, Satish Chandra Mishra of the BSP, Sanjeev Kumar of the JMM, Prasanna Acharya of the Biju Janata Dal, Tiruchi Shiva of the DMK, A Navaneethakrishnan of the AIADMK, Misa Bharti of the RJD, Abdul Wahab of the IUML and KTS Tulsi (Nominated). He said ruling BJP should suggest the name of its members to the committee. Mr Sukendu Sekhar Roy of the AITC also moved a motion for referring the Bill to the select committee. Heated arguments ensued between members of the ruling party and opposition over the issue.