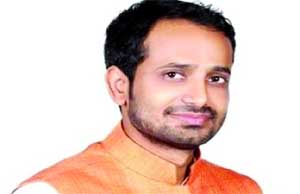 Chronicle Reporter, Bhopal Congress MLA Hemant Katare was on Friday booked for rape, illegal confinement and other charges, levelled against him by a girl, who herself was behind the bars, on the alleged charges of blackmailing the MLA. According to police sources, DIG Dharmendra Chaudhary ordered to file a rape case against the Ater (Bhind) MLA after the 21-year-old girl filed a written complaint. The case came to limelight on January 24, when Katare complained that a girl was trying to extort Rs 2-crore from him by threatening to frame him in a false rape and attempted suicide case. The crime branch arrested the girl, a journalism student from Rachna Nagar area of the city, soon after she collected money from Katare. After her arrest, a series of videos surfaced on the social media, defying Katare’s statement given to the police in his complaint. One video even alleged the crime branch of favouring the MLA. The victim’s mother and friends have filed another case in Bajaria police chowki against Katare and his friends for kidnapping and threatening them. DIG Dharmendra Chaudhary said the girl filed the complaint on Thursday night at the women’s police station. “We have registered the case. The MLA has not been arrested. We will do so when necessary.” Katare, who is MLA from Ater, Bhind, was called to the crime branch office on Thursday night following which his mobile was seized as evidence. The case has been in the limelight over the past fortnight because of a series of videos that have gone viral on social media. Katare too had released a video in which he defended himself. Bhopal South’s Superintendent of Police (SP) Rahul Kumar Lodha today said a case was registered against Hemant Katare on the complaint of the woman, who is currently lodged in Bhopal Central Jail. Lodha said that a case against Katare was registered after the journalism student’s complaint was forwarded to police authorities by the superintendent of Bhopal Central Jail, where she is currently lodged. When asked about the possibility of Katare’s arrest, Lodha said further action would be taken following completion of investigations, including recording the woman’s statement in court as well as a medical examination. On January 24, Katare complained that a girl was threatening to frame him in a false rape and attempted suicide case and demanding Rs 2 crore from him for keeping quiet. Katare told police that the girl had later settled for Rs 25 lakhs and he was supposed to pay the first instalment of Rs 5 lakh to the girl that day. The crime branch swung into action and arrested the girl, a journalism student from the Rachna Nagar area of the city soon after she collected the money from Katare. The MLA told police that he had met the girl only a couple of times in the last six months, and that too, during public functions. She had wanted him to invest in some ventures which he refused, and subsequently she started threatening him.

Following the case against Katare today, the Congress said that it was an effort to harass Katare. “This is being done to harass Katare, who himself had filed a complaint against this woman for blackmail. She was caught red-handed while accepting money from Katare,” Congress spokesman Pankaj Chaturvedi said.