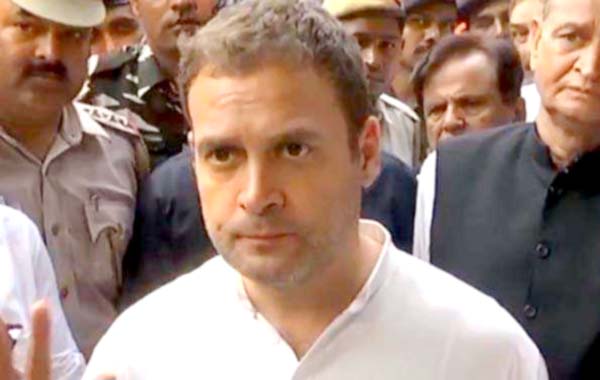 New Delhi, Controversy swirled as the Supreme Court on Friday ordered Central Bureau of Investigation interim Director, M Nageshwar Rao to refrain from any policy decision and directed the Central Vigilance Commission to inquire into the allegations levelled against its ex-boss Alok Verma, reverting back within two weeks. Respondent No.6 – M. Nageshwar Rao, who has been entrusted with the task of looking after the duties of the Director of the CBI by an order dated 23rd October, 2018 of Department of Personnel and Training shall, as of now, not take any policy decision and will only perform the routine tasks that were essential to keep the agency function, the three-judge bench ruled. The apex court ordered the CVC to conduct an inquiry into the allegations levelled against Alok Verma and to file a report in two weeks time in a sealed cover. Headed by Chief Justice of India Ranjan Gogoi and also comprising Justices Sanjay Kishan Kaul and K M Joseph, the bench also issued notice to the Union of India and CVC.Hearing the petition filed by Alok Verma challenging the Centre's decision to compulsorily send him on indefinite leave, the bench directed that the probe would be supervised by retired Justice AK Patnaik. "The enquiry will be conducted under the supervision of a retired judge of this Court. Shri Justice AK Patnaik who is requested to accept the assignment and ensure that enquiry is completed within the time frame fixed by this Court," the bench ordered. November 12 was set for the next hearing in the high-profile case, which under a media glare, has captured the attention of the nation. Congress takes to the streets: Asserting that the suspension of the No 1 and 2 of CBI was the outcome of Prime Minister Narendra Modi's attempts to sweep wrongdoings in the big-ticket Rafael deal under the carpet, Indian National Congress president Rahul Gandhi led a protest march in the Capital. Protesting against the Modi government's decision to send CBI chief Alok Verma on forced leave from October 24, Mr Gandhi, accompanied by party General Secretary Ashok Gehlot and leader of opposition in Rajya Sabha Ghulam Nabi Azad, among others, started the protest march from Dyal Singh College to CBI headquarters in Delhi. After being stopped, Mr Gandhi along with the Congress workers staged a sit-in.The protest outside the CBI headquarters was a part of Congress’ call of nationwide demonstration in the wake of internal war in the agency between its chief and special director Rakesh Ashthana.Vigil was stepped up in the area and traffic diverted. Responding to the accusations, Union Home Minister Rajnath Singh said the principal opposition party "does not have any people's issues to raise.' "Congress does not have any people's issues to raise..... That is why they are taking up these non-issues," Mr Singh told the media here. On Mr Verma moving the apex court against his compulsory leave order, the Home Minister said: "We should wait for the investigation report.' Delhi Chief Minister Arvind Kejriwal tweeted, 'Welcome intervention by the hon’ble Supreme Court of India in the CBI matter. 'In the interest of the nation, hope that institutional integrity of CBI will be upheld and powers that be will understand that their illegal acts will not go unchallenged,' added the convenor of the Aam Aadmi Party. BJP hits back The National Democratic Alliance government said the apex court verdict had vindicated its stand that "highest standard of fairness" should be maintained in matters related to corruption, especially in the premier investigative agency. "The Government considers the court's order today as very positive development," Union Finance Minister Arun Jaitley told reporters here. "....highest standard and due process of law -- that was the object behind the CVC's directions, that was the object behind the government decision," he said, adding that the apex court in its ruling added two additional steps that is early disposal and an oversight judge.The court's order only added to that "fairness process", he said. Mr Jaitley said the government has always maintained that in matters related to corruption of two top CBI officials cannot be probed by the agency itself. The power of supervising the functioning the CBI is with the CVC and today's judgement establishes this fact and strengthens the argument of the government. Ambani connection? In a series of tweets, AICC media incharge Randeep Surjewala said that the apex court order had ensured that ‘brazen attempts to interfere, infiltrate or capture institutions will be banished’. Accusing Prime Minister Modi of undermining the integrity of the two institutions, Mr Surjewala stated,' Modiji, History won’t forget how you severely undermined the reputation of two premier institutions, CBI & CVC. In an exception, SC has directed that enquiry by the CVC will be monitored by a Retd SC judge. You are the sole reason for this trust deficit.' May be now even Anil Ambani will run away, Mr Gandhi told reporters outside Lodhi Road police station where he had courted arrest. The Congress chief added that the likes of Nirav Modi and Mehul Choksi have fled and in that context went on to add that probably even Anil Ambani would flee India. Anil Ambani is the younger son of business doyen Dhirubhai Ambani, who was reputed to be close to the Congress leadership during the tenure of Indira Gandhi and Rajiv Gandhi as Prime Ministers. Mr Ambani (59) is the chairman of Reliance ADA Group which came into existence in June 2005 after a demerger from Reliance Industries Limited.Telegu Desam Party, All India Trinamool Congress and the Left also joined the Congress protest.