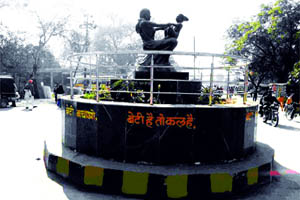 Chronicle Reporter, Bhopal Integrated and constant efforts of the State Government, PCPNDT, Collector, Women and Child Development Department for the last few years have yielded positive results in Bhind district. According to census-2011, Bhind was the district with the lowest sex ratio in Madhya Pradesh. The district, once was at the bottom not in the country but in Asia for its lowest sex ration, is now writing a new script. The highest number of girls born in Bhind district among the districts of Beti Bachao-Beti Padao campaign. According to the 2011 census, there were only 896 daughters on one thousand boys in Bhind, the figure now has reached 929 in the year 2017. In Bhind district, 13,829 girls and 15,050 boys were born in the year 2014-15. There was a difference of 1221 in both. In the year 2015-16, there were 16,231 boys born and 14,547 girls and there was difference of 1684. Next year, in 2016-17, 13,797 girls were born, and there are 14,845 boys born and the difference between two genders was reduced to 1,048. In order to remove disparity between girls and boys in Bhind district and create public awareness, Beti Bachao-Beti Padao Chauraha was constructed under the guidance of authority of PCPNDT and collector. The spots at Squares were successful in communicating silent ethical message to all passers-by. Regular meetings of PCPNDT under the collector’s leadership were held. Special discussions were held by collector on implementation of Ladli Laxmi Yojana in the review meetings. The villages, where girls could not live up to the age of five years after birth by conducting special studies to find out reasons of deaths of maternal and infant mortality rates, were earmarked. Special attention was paid to these villages. In the year 2015-16, police action was taken by carrying out sting operation at illegal abortion racket in Bhind under PCPNDT Act under the guidance of Bhind Collector and Superintendent of Police. Case is pending in the court. Such actions put control over illegal abortion racket. Girls making the district proud were made brand Ambassador of Beti Bachao-Beti Padhao Campaign. Posters of these girls, who were selected in sports, prestigious services were displayed at public places and they were awarded in the programs. Winner of National and International Canoeing-Kayaking Competitions, Ku Puja Ojha was feted on the arrival of chief minister on December 18. Gauri- Kaksh was constructed at district hospital in Bhind and there, aadhar card of mother giving birth to girl child, providing mamta kit on priority to mother after delivery and opening of bank account on zero balance was opened for providing amount of Janani Suraksha Yojana. The Superintendent of Police and other officials of the district adopted the meritorious girls and provided economic help and worked for their progress and to increase respect for girls in the society. Free Sankalp coaching was launched for preparations of public service commission and union public service commission examinations on the initiative of collector. The girls were given priority and motivation for preparations for the prestigious service examinations. Special vigilance was carried out in execution of all schemes for caring of girls. District registered first case against female foeticide in Country Sarpanch of village Kharoa, Ram Akhtia Singh Gurjar, informed the police about the killing of new born girl child by former Sarpanch Suryabhan Singh Gurjar in Bhind, defamed for the highest sex ratio after birth in Asia. It was first time in the country that first case under 302 of IPC was registered for the killing of new born child.