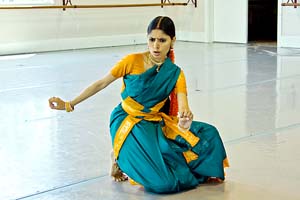 Chronicle Reporter, Bhopal Kuchipudi exponent Hima Bindu Kanoj mesmerized the audience with her graceful classical rendition of Kuchipudi in a live performance along with her troupe at Shaheed Bhavan auditorium on Monday. The event was organized by Kaivalya Cultural and Arts Academy, Bhopal. Hima Bindu Kanoj, one of the pioneers of Kuchipudi dance, hails from Hyderabad. Hima’s precise blend of grace, expression and dance won claps from viewers. Her fleet-footed footwork and immaculate expressions left the audience spell-bound. Hima and the troupe began the performance with Natyashastra Slokas. The vivid expressions and marvellous acting of the artists captivated the interest of the audience. The dancers then performed Jatis. Each performance was presented with perfect expressions and matching footwork. The next performance Gajaananayutam Ganeshwaram was a composition of Mutthuswami Deekshitar which was all about the praises of Lord Ganesha. The artists wrapped up their show Cheliye Kunjanamo. Hima Bindu Kanoj is practicing Kuchipudi since she was seven years old. She is the disciple of Guru PB Krishna Bharati and also refined her skills under the guidance of eminent exponents of Kuchipudi. Her zeal, determination and extreme hard work has enabled her overcome many obstacles and today, she has carved a niche for herself. Besides, Kuchipudi dance defines the purity of years’ old tradition and both the dancers with their spell binding performance showcased the ancient traditions of the country through the classical moves.