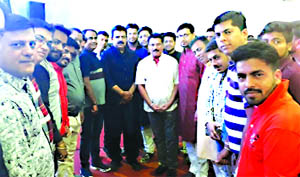 Chronicle Reporter, Bhopal Sindhu sena has invited international cricketer Narendra Hirwani for the opening ceremony of Sindhi Premier League - 5 cricket tournament on 27 May 2018. Sindhu sena is organising Sindhi Premier League Night Cricket Tournament this year also at Babe Ali Cricket Ground. In this tournament about 48 teams of M.P. will take part. This tournament will be played from 27 May to 3 June 2018. The famous international cricketer recently arrived in Bhopal. Narendra Hirwani has been invited for the opening by the president of Sindhu Sena Rakesh Kukreja and the president of I.D.A Shankar Lalwani. Narendra Hirwani has congratulated Sindhu Sena and has assured them to come in the tournament. On this occasion the president of Sindhu Sena Rakesh Kukreja,Sourabh Gangaramani, Anil Tharwani, Sumit Ahuja, Vikas Wadhwani, Kamal Rajani, Vijay Lekhwani, Rohit Phelwani, Lakshman, Vishal Manwani, Jay Sabhnani and other members of Sindhu Sena were present.