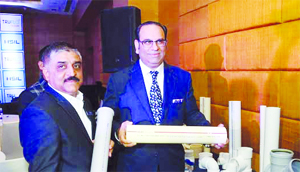 Agencies, Hyderabad HSIL, indina’s leading Sanitaryware Company, has commissioned a Rs 160-crore manufacturing plant at Isnapur village in Medak District of Telangana state. The pipes unit, which is the first of its kind manufacturing facility in the state, currently has a total production capacity of 30,000 metric tonnes and with plans to scale up the production capacity to up to 60,000 MT by 2020 in order to emerge as a key player in the CPVC and UPVC pipes and fittings segment, HSIL Vice-Chairman and Managing Director Mr Sandip Somany said in a press conference here on Monday. The company has entered into an alliance with Sekisui Chemical Co. Ltd, a leading $9-billion in revenue Japanese company for supply of Chlorinated Polyvinyl Chloride (CPVC) resin that goes into manufacture of these pipes, he said. We have entered into this segment and expect to have a turnover of about Rs 500 crore within three years and take it up to Rs 800 crore within five years. The market for such pipes is poised for huge upside in the housing sector, water transport and under the Swatch campaign,” he explained. The company, which closed last financial year with revenues of Rs 2,300 crore, expects to grow at 15-20 per cent per annum. However, the current financial year has been challenging due to various issues, including the transition towards GST implementation. “We may close the current financial year with a growth of 8-10 per cent,” he said. Referring to its expansion projects taken up with a capex of Rs 350 crore, Somany said the company expects to commission its expanded security bottle caps facility, also in Telangana, by September 2018. This project, set up with an investment of Rs 100 crore, will take the capacity up from 230 million units to one billion units per annum, he added. Mr. Rajesh Pajnoo, President, HSIL Pipes Division, HSIL Limited, said the Indian market size of the Indian PVC pipes and fittings is poised to grow at a double-digit CAGR over the period 2015-20 and is projected to reach an estimated INR 327 billion by FY2020. This remarkable growth is going to be driven by the expansion of housing sector and increasing water sanitary management, he added.