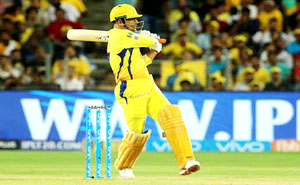 Kolkata, The third week of Indian Premier League 2018 belonged to Sunrisers Hyderabad, who gave the other teams a lesson by winning three in a row despite putting up sub-par totals on each occasion that took them to the top of the table with six wins in eight games. Kane Williamson’s men began their week by bowling Mumbai out for 87 at the Wankhede Stadium after scoring a relatively low 118. Siddarth Kaul picked up 3/23 while Rashid Khan, who had been taken for 49 and 55 runs in his last previous outings, came back strongly with figures of 2/11. In their next game at home, Ankit Rajpoot's five-wicket haul for Kings XI Punjab restricted Hyderabad to 132/6 but Khan came to the fore once again returning 3/19 and helping his team bundle the visitors out for 119. Hyderabad then notched up a respectable 151/7 courtesy Williamson's 43-ball 63 away against Rajasthan Royals and then restricted the opposition to 140/7. A change of leadership at Delhi Daredevils brought about instant success for the franchise as Kolkata Knight Riders went down by 55 runs. After losing against Kings XI Punjab – their fifth loss in six games – Gautam Gambhir stepped down as captain and Shreyas Iyer, only 23, was named the new leader. Gambhir sat out the next game, the one against Kolkata, and Iyer stepped up to smash a 40-ball 93 not out to take Delhi to 219/4 – the highest team total in the competition so far. Kolkata could only manage 164/9 in reply. Iyer's onslaught was matched to a large extent by former India captain MS Dhoni, who played one of his better IPL innings in recent times – a 34-ball 70 not out against Royal Challengers Bangalore – to help his Chennai Super Kings chase down 206. While Chennai were high on confidence after this victory, they were dealt a minor jolt by Mumbai Indians in their next match, where an inspired Rohit Sharma half-century helped Mumbai chase down 170 and register only their second win of the tournament. Bangalore were the most disappointed at the end of the week as they lost both their games, first against Chennai and then against Kolkata, to slide to the seventh spot with four points from seven games. Once again, the batsmen did their job, but the bowlers and fielders failed to lift themselves. Delhi are still at the bottom with as many points but with a poorer net run rate than Bangalore. Behind Hyderabad at the top are Chennai and Punjab, both on 10 points, with Kolkata on eight points and Rajasthan on six, and Mumbai, Bangalore and Delhi bringing up the rear. Delhi's attempt at reviving their fortunes, marked by a change in captaincy, was given a much-needed boost by new captain Iyer, whose 40-ball 93* with three fours and 10 sixes was the highlight of the week. The Delhi management will hope the win isn’t a flash in the pan and spurs the team on to bigger and better. Five-wicket hauls aren't commonplace in one-day international cricket let alone T20 cricket. Yet, that is what Rajpoot achieved for Punjab, when he picked up five of the six wickets to have fallen against Hyderabad and ended up with figures of 5/14. His efforts were recognised with the Player of the Match award but they couldn't help Punjab win the game.