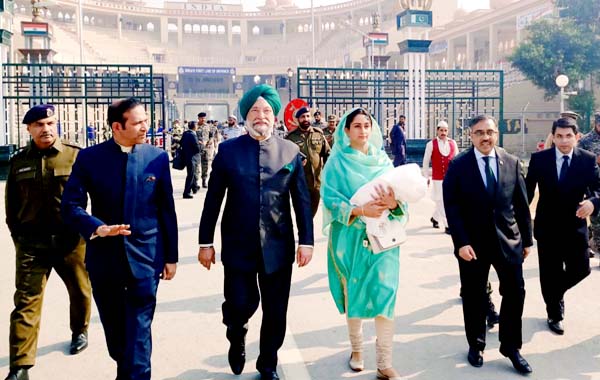 New Delhi/Attari, "I am going there as a Sikh.....I have not been invited by anyone but I am going there as a Sikh," Union Minister and senior Akali Dal leader Harsimrat Kaur Badal said on Wednesday as she, accompanied by her ministerial colleague Hardeep Singh Puri, headed for Pakistan to attend the ground breaking ceremony for the much talked about Dera Baba Nanak-Kartarpur Sahib corridor. "This is a historic occasion. The Kartarpur Corridor has been a long-pending demand of the Sikh community. I am privileged to be going there to offer prayers. This is a significant measure among the several measures announced by the Government of India last week in connection with the 550th birth anniversary of Guru Nanak Devji," Ms Badal told reporters before crossing over to Pakistan. Mr Puri, a former diplomat-turned-politician also said: "I am a proud Sikh to be going there". From the Indian side, Vice President M Venkaiah Naidu laid the foundation stone of the Kartarpur corridor up to the international border with Pakistan at village Mann in Gurdaspur district of Punjab on Monday. The Union Cabinet, in a meeting presided over by Prime Minister Narendra Modi, had last week approved the building and development of the corridor to commemorate the 550th Birth Anniversary of Guru Nanak Dev next year. Two Union Ministers - both Sikhs - Harsimrat Kaur Badal and Hardeep Singh Puri will attend the ground-breaking ceremony of Dera Baba Nanak-Kartarpur Sahib corridor. The event to be held at Narowal, about 120 km from Lahore, will be graced by Pakistan Prime Minister Imran Khan. Pakistan had invited External Affairs Minister Sushma Swaraj to attend the ceremony - which was turned down by Ms Swaraj. However, in a letter to Pakistan Foreign Minister Shah Mahmood Qureshi, Ms Swaraj had said the Indian government would be represented by Union Ministers Ms Badal and Mr Puri. Prime Minister Narendra Modi on last Friday hoped that the Kartarpur Corridor would act as a bridge between the people of India and Pakistan and referred to the fall of the Berlin Wall. The issue of Kartarpur Sahib came into focus after Punjab Minister and Congress leader Navjot Singh Sidhu visited Pakistan in August to attend the oath-taking ceremony of his cricketer-turned-politician Imran Khan as new Pakistan Prime Minister. Meanwhile, talking to reporters in Hyderabad, the External Affairs Minister told Pakistan that Kartarpur Corridor development should not be linked to reviving bilateral talks. "Until and unless Pakistan stops terrorist activities in India there will be no dialogue," Ms Swaraj said.Punjab Minister and Congress leader Navjot Singh Sidhu will also attend the function in his personal capacity.