I am judged for my decisions: Priyanka Chopra 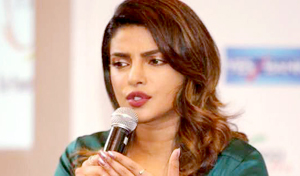 New Delhi, Actress and philanthropist Priyanka Chopra who flew back to India to be a part of FICCI FLO interactive session, said she is often judged for her decisions, but now she chooses to keep some aspects private. Priyanka, was a part of FICCI FLO interactive session on Monday, titled ‘Challenging the Status Quo & Forging New Paths’ in the national capital. After meeting with the women of FICCI FLO, the actress sat down for an interview with journalist Vir Sanghvi, where she discussed her professional life and career. 'I am often judged for my decisions, like my decision to do films like 'Aitraaz' early in my career, but now I choose to keep some aspects private,' Priyanka said. Hinting of her rumoured relationship with American singer Nick Jonas, Priyanka said, 'My entire life, especially my personal life, everything about me is not for public consumption. 90 per cent of my life is for public consumption, but 10 per cent is for me. I have the right to keep that for myself," she said. 'I am a girl and I have the right to keep that to myself. My family, friendship, my relationships are things I don’t think I need to defend or explain it to anyone. I am not running for the Office, so I don’t think I need to give explanations,' she said. 'Sometimes I laugh, sometimes I get annoyed… But mostly, I tell my publicists ‘Let it be, today’s news is tomorrow’s trash’,' she said. The actress was filming for 'Gunday' (2014) in India when she was approached by ABC network for a television show. Calling her journey to America and her three-year stint on American television organic, Priyanka said, "I really believe that destiny has incredible milestones for me, in my life, and I just have to make sure that I take each opportunity and make it a 100 per cent." 'It is a smart thing to recognise opportunity as it knocks on everyone's door,' she said. Priyanka, who had studied in the US as a teenager, eventually agreed to a television deal as she also wanted to see herself represented onscreen. "My biggest pet peeve was like, to not ever see anyone on mainstream television who looked like me," she said. Priyanka, who bagged a role of half-Indian Alex Parrish --an FBI agent in 'Quantico', felt she could demand the kind of roles she felt she should get. 'I am playing characters which have nothing to do with my ethnicity and I feel it will open the door for Indian talent or South Asian talent to become mainstream.Why do we play the sidekicks? I want to play the leading lady and I am not going to compromise on it,' she said. 'Alex to me is an unapologetic modern female who lives life on her terms. She is extremely flawed, she’s not perfect, she’s a loner, she doesn’t like people, she only uses people.So, she’s basically playing a man, which is awesome, because girls don’t get to play that. And I was like ‘Yes, we get to turn the tables’,' Priyanka said. 'It’s my dream to be able to play a man... That’s the next thing I want to do,' she said. 'Women have fewer opportunities coming their way and that is why they have to elbow each other out to go ahead. We have been conditioned to pull each other down," the actress said. Priyanka will be next seen in Shonali Bose's 'The Sky Is Pink', where she plays the mother of an 18-year-old girl, played by Zaira Wasim. She said she welcomed the challenge to play all kinds of roles. "It's a beautiful story of a child, Aisha Chaudhary who died after writing a book. She was diagnosed with severe immuno deficiency disorder, kids don't survive that. Her mother, her father fought to give her that survival, it's an incredible movie of dealing with death, grief and at the same time, making it a celebration of a person's life, instead of being bogged down by it," she said, adding that she is also co-producing the film. The actress shared that she makes a 'Bible' for her character in each project - who she is, her backstory, etc. 'The character becomes my best friend as she has to act like her for the project,' she stated. On the work front, Priyanka recently wrapped up Hollywood flick 'Isn’t It Romantic' alongside Adam Devine, Rebel Wilson and Liam Hemsworth. The film is scheduled for Valentine’s Day release next year. She is also starring in Shonali Bose’s tentatively titled 'The Sky Is Pink' with Farhan Akhtar and Zaira Wasim. Besides these two films, she has booked a leading role in Hollywood film 'Cowboy Ninja Viking' opposite Chris Pratt.