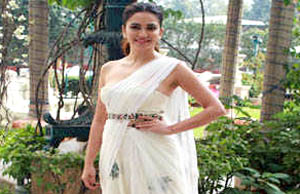 New Delhi, From South Indian movies to Bollywood, actress Kriti Kharbanda is creating a niche in the film industry.Talking to UNI, Kriti who was in the national capital along with her co-star Pulkit Samrat to promote her upcoming movie ‘Veerey Ki Wedding’ said, “the kind of characters and scripts I am offered now are very author backed roles.” Whether there has been a change in her career after ‘Shaadi Mein Zaroor Aana‘, Kriti said, “Ofcourse there has been a lot of changes. I have become very choosy post ‘Shaadi Mein Zaroor Ana’. People have started looking at me very differently.” “My entire motive of doing ‘Shaadi Mein Zaroor Ana’ and after watching it, I finally managed to convince people and surprised them. Many have said that I can do acting. So I will make sure whatever I sign now must be better than 'Shaadi...' she said. Doing back to back wedding based movies, Kriti said,”It's very tiring.Playing a role of a bride is not very easy. I have played bride so many times onscreen that now I am bored and in reality I will want to do my wedding in Pyajamas.” Asking how different her character ‘Geet’ in the movie is from that of Kareena Kapoor’s ‘Geet’ in ‘Jab We Met’, the 29 years old actress said,”There is a lot of differences between the two. I am not even a half per cent of Kareena mam. So no,that is a very big baggage I am carrying of Geet.” “I was very happy that I am playing a character that was named after something very iconic. But there was no pressure. Because this character is not like that. If it was a remake or an extention of ‘Jab We Met’ then there would have been a problem, because then I had to go in Kareena’s shoes and perform better than her to make a mark for myself. But there is nothing of that sort. That was an author backed role and this is just a character,” she said. Asked whether failures at the box office worries her, the ‘Raaz Reboot’ fame actress said, ”Ofcourse it worries me. It's like someone else got promotion instead of me. And then I look at myself and say that I never thought I will come till here and I am getting work.” “So the point is keep working hard, with honesty.Nothing can happen without hard work. And it takes one Friday to change your life. So I am waiting for that Friday,” she said. Asking her expectations from this movie, Kriti said,”I don't keep expectations. I am very scared of it. With ‘Raaz Reboot’, ‘Guest in London’, I had expectations and walked ahead but was disappointed. With 'Shaadi Mein Zaroor Aana' I kept no expectations and it did well.So I think that formula is going on.” Kriti said she wants to play a biopic on Tennis champion Steffi Graf onscreen.“She is absolutely amazing and I have played Tennis for six years,” she added.Talking about the controversies that’s revolving around ‘Veerey Ki Wedding’, Kriti said, “ I feel like controversies actually do not matter, if the product is good, everyone will appreciate it.” The movie is featured under the banner of Make My Day Entertainments and directed by Asshu Trikha.It stars Pulkit Samrat, Jimmy Shergill and Kriti Kharbanda in the lead roles.