I am very glad that Bollywood pressure came which motivated me to lose weight: Parineeti Chopra 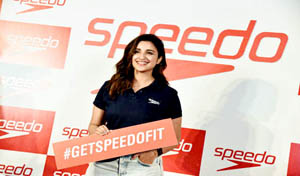 New Delhi, Actress and fitness enthusiast Parineeti Chopra said she is very glad that the Bollywood pressure came, as it helped and motivated her to lose weight and come up with such dramatic change with her body. Talking to agencies, Parineeti who recently became the brand ambassador for 'Speedo', said that it was not because of the movie pressure that she lost her weight, but it was due to Bollywood that she got motivated to get into shape and become fit. 'Bollywood pressure helped me in losing weight. Because I was trying to lose weight for past 14 years. And when I came into the movies and came in the public eye --the audience, the fashion police, my directors and producers everybody started giving me feedback on how I look and that really pushed me to work double hard to lose all the weight and work at it,' Parineeti said. 'Otherwise I don't think I was had that motivated. So I am very glad that pressure came but I didn't start weight loss because of the movie pressure, I already started much before,' she said. Whether she is doing justice to her role of an ambassador for 'Speedo', Parineeti said,'I hope I am doing justice. I genuinely believe in this brand. I believe in what they stand for and I love their clothes, caps, swimming goggles, everything that they make I really love and I personally use them. So I am very happy that I am the brand ambassador for this brand because I know I will be the brand ambassador honestly and truly and I won't lie.' Talking how she deals with the criticism regarding the body image, the 'Ishaqzaade' actress said, 'I ignore them. It's more important for me to be happy with what I look like than what people think. It depends on what path you want to take. If you are comfortable with the body you have and you do not want to make change then you should stay like that. I always wanted to make that change.' 'I always want to look better. I always wanted to inspire people. So I only listen to those people,' Parineeti said. Telling about her favourite workout, the 'Meri Pyaari Bindu' fame actress said, 'I really like Yoga. I don't like going to the gym and do those boring exercises. I did a lot of Kalaripayattu. Now I like aqua workouts also. I like to workout in water because I love being in a pool. I am fully a water baby so it's keep it fun and also in the summer it's the best way to workout.' About the diet plan she said, 'My diet plan is to balance. When I crave something and I feel like eating something I eat it. Then I balance it out for a few days. I try to keep it real. Because if I give a very strict diet plan to myself then I won't be able to maintain it.' Parineeti said she doesn't believes in supplement diets.'I don't believe in supplements at all. I only have food which is natural. I don't believe in protein supplements or any other thing like this. I don't have them at all,' she said. Whether the perspective of directors and producers have changed towards her after the dramatic weight loss of her, Parineeti said, 'No. I don't think so. But I think my own personal brand image has changed. In brands like 'Speedo' I have to be myself. I have to be Parineeti, I am not playing a role. If I am not fit I cannot inspire people to be fit. So there it plays a very important role.' 'But in movies I will get the roles that I think directors believe I can do. But yes there are certain roles, certain kind of clothes that look better when you are fitter. So now I could play those movies little more easily than I could before,' she said. When asked if her approach has changed towards signing a film, Parineeti said no, it's the same. 'I love commercial cinema and will always do commercial films. I love films where I have great performance and where there is a great demand of homework that I have to do. So I will always continue to do those films also,' she said. Parineeti said it is 100 per cent a good time for actresses in the industry. 'From the first film only I made a mark despite that there were four girls. I have got movies where I had very important part in the story. I do think yes women are getting amazing roles and all the actors around me like my sister Priyanka, Alia, Deepika, Anushka, Kangana,Vidya etc everybody is doing amazing roles and they have proved that female actors are as good as male actors,' she said. Parineeti also said if she gets a great offer in Hollywood then she will do it. Telling about her success mantra, the actress said, 'it is not in our hands. It's in the hands of the audience, good luck and hard work.' 'Speedo', swimwear brand recently announced Bollywood actress and fitness enthusiast Parineeti Chopra as their new fitness ambassador. As the new face, Parineeti joined an esteemed roster of Olympians, athletes and trainers from around the globe. 'Speedo' as a brand, is synonymous with performance swimwear, and via its global campaign #GetSpeedoFit, it has been working to elevate the status of swimming for fitness and reinforce that water workouts are the next big trend to get fit and achieve a total body workout.