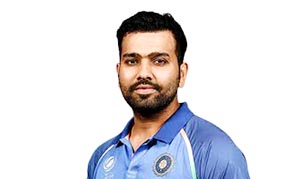 Colombo, Team India stand-in skipper Rohit Sharma is elated with wicketkeeper-batsman Dinesh Karthik's 8-ball 29 run cameo which helped his side to clinch the Nidahas Trophy in style against Bangladesh at the R Premadasa stadium here on Sunday night. Significantly, Karthik's scintillating last ball six helped the men in blue to register a four-wicket win over Bangladesh in the tri-series final. Speaking to mediapersons after the match, Rohit said,"He has batted in that position in a list of games for his state teams. Even when he was playing for Mumbai Indians (in the Indian Premier League) with me, I knew his ability with the bat." "He's got some different types of skill shots that would probably be required at that point at the death overs. That was the only reason we held him back. I can proudly say it paid off," added he. The skipper further said the team was confident that Karthik will guide India home. "We knew he (Karthik) could finish off the game for us," said Rohit. The skipper also praised the Bangladesh side for making the issue adventurous and taking it to the last over. "They (Bangladesh) play fearless cricket, it's always good. Sometimes, it can bite you when things don't go your way but that is the style of cricket they want to play," explained Rohit. "They are certainly a very good team... in the last three years, we've seen how they've changed their style of cricket," concluded the skipper.