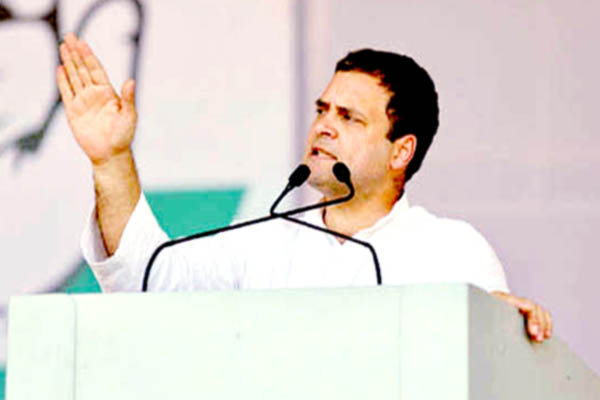 Aurad, Karnataka, Congress President Rahul Gandhi today stressed that he will never launch a personal attack on Prime Minister Narendra Modi as he was the head of the State. Responding to the personal attacks Mr Modi had been making against him, Mr Gandhi who began a two day campaign in the state in this northern tip of Karnataka alleged that wherever Mr Modi spoke in Karnataka, he made it a point to attack him personally. " But I will never attack him personally' he said adding 'Mr Modi should understand that he is Prime Minister of this country and not of BJP'. Whenever. He spoke he should spell out his plans to solve the problems including employment for youth, eradicating corruption and other burning issues and not indulge in personally attacking somebody." Referring to the saying of 12th century saint and social reformer Basavanna,"Nudidante Nade' (Do what you preach) Mr Gandhi said that Prime Minister should implement what he assures. But he has failed to keep up his promise of creating jobs to the youth after coming to power, he has failed to come to the rescue of farmers of Karnataka who struggled during three years of severe drought condition. He never spoke a word about waiving off their farm loans taken from nationalised Banks. Alleging that Mr Modi was not interested in protecting the interests of the farmers, Mr Gandhi said that "despite of my appeal to him (Mr Modi) to waive off Karnataka farmers loan since they are suffering due to severe drought, he did not utter a single word. But he waived off Rs 2,45,000 crore loan of 15 Industrialists and least bothered to come to the rescue of Karnataka farmers."