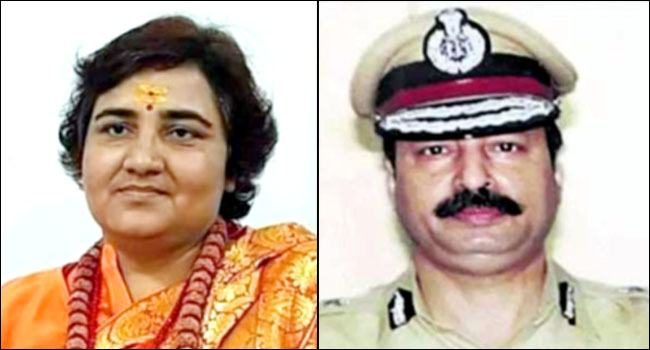 New Delhi, Indian Administrative Service Association on Saturday showed solidarity with their IPS colleagues in supporting 26/11 martyr Hemant Karkare whose name figured in Bhopal BJP nominee Sadhvi Pragya Singh Thakur's 'curse' comment. IAS Association said in a tweet, 'We stand by our IPS colleagues. Hemant Karkare is a martyr and we salute him.' Pragya Singh Thakur has claimed that Hemant Karkare, the IPS officer martyred in the 2008 Mumbai terror attacks, had died because she had cursed him. Karkare had led the probe by the Maharashtra anti-terrorism squad (ATS) into the Malegaon blast case of 2008, in which Thakur was a suspect. Though, she apologised after some time for her statement, saying, 'I felt that the enemies of the country were being benefited from it, therefore, I take back my statement and apologize for it, it was my personal pain.' The remark of BJP's Bhopal candidate Thakur against Hemant Karkare has drawn a lot of flak. IPS Association on Friday said, 'Ashok Chakra awardee late Sri Hemant Karkare, IPS made the supreme sacrifice fighting terrorists. Those of us in uniform condemn the insulting statement made by a candidate and demand that sacrifices of all our martyrs be respected.'