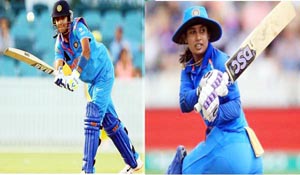 New Delhi, India women cricket team skipper Mithali Raj is placed fourth while Harmanpreet Kaur slipped to the ninth position in the latest ICC rankings for women, released on Wednesday. After unbeaten knocks of 89, 101 and 44 runs against West Indies, Kiwi batswoman Suzie Bates leapfroged Australian Meg Lanning and Mithali to enter the second slot in the batting rankings beside completing 4000 ODI runs. Australian Ellyse Perry holds the numero uno position in the batting charts. On the other hand, after smashing couple of half-centuries against Australia in the recently concluded ODI series against Australia, batswoman Smriti Mandhana jumped 14 paces to be at the 14th place in the batting charts. In the bowling chart, experienced pacer Jhulan Goswami, who has been out of the side from a long time due to an injury, remains seated at the fourth place while Shikha Pandey, Ekta Bisht and Rajeshwari Gayakwad are placed at the 13th, 14th and 19th place respectively.