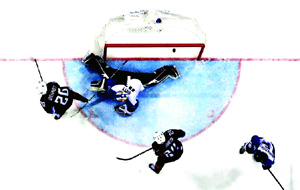 Agencies, Gangneung The women’s ice hockey tournament at the 2022 Beijing Winter Games will expand from eight to 10 teams, the head of the International Ice Hockey Federation (IIHF) said on Monday. The decision comes despite a huge gap in competitiveness among the leading teams with Canada and the United States still dominating the sport. “The Chinese, at the last meeting we had in Beijing, there was a request to add two women’s teams,” IIHF President Rene Fasel said before the Pyeongchang women’s semi-finals. “We play the top women’s championship with 10 teams so we extended already our world championship.” Canada and the United States, who have won every gold medal since women’s hockey was introduced to the Olympics at the 1998 Nagano Games, are a class apart.It has been the same story at the world championships where Canada and United States have played in every final with Canada winning 10 and the Americans eight, including the last four. The one-sided games that tarnished previous Olympic and world championships have been largely reduced with the IIHF seeding teams into groups with the four highest-ranked countries in one and the four lowest in the other. But the move has only masked a lack of competitiveness with Canada and the United States on track to meet again in the Olympic final in Pyeongchang. The U.S. booked their spot in the gold medal contest with a 5-0 win over Finland while Canada take on the Olympic Athletes from Russia team later on Monday. Fasel, however, is impressed by the progress being made in the women’s game. “We are surprised in a positive way,” said Fasel. “After 18-0 Canada over Slovakia in Vancouver (2010 Olympic Winter Games) we have had progress.“It will take less than the men’s teams (to be competitive). I have some numbers from the 1930s when Canada beat Switzerland 30-0. It was 70 years (before the Swiss beat Canada) and the women are closer.”