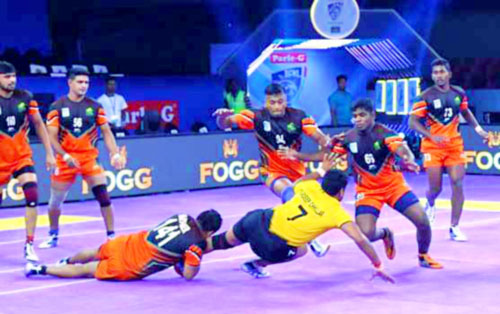 Mysuru, Diler Delhi continued their winning momentum after beating Telugu Bulls by 3 points in the first season of the Indo International Premier Kabaddi League here on Friday night. Till the end of third quarter, Telugu dominated the match and got a lead of 33-23 over Delhi. However, Delhi fought back strongly in the fourth quarter and scored a total of 17 points against Telugu in the 4th quarter. This helped Delhi turn the match on its head and walk out victorious by a score line of 40-37. Sunil Jaipal again played a vital role in Delhi’s win and scored a mind blowing 14 raid points for his team. Hardeep Chhillar also earned 7 raid points for Delhi. On the other hand, for Telugu Bulls it was Abhinandan Kumar who scored a total of 7 points including six raid points and 1 tackle point but ended up on the losing side. Delhi has not lost any match in the league and remains at the top of the points table with 11 points in their kitty.