Improving health of girls also must besides protecting them 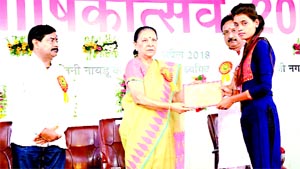 Chronicle Reporter, Bhopal Governor Smt. Anandiben Patel has told teachers to pay more attention to the subjects of the choice of girl students and encourage them. She said that she was happy to know that children from poor families are also participating in competitive examinations and performing well. Education of girls plays an important role to give new direction to developing the society and the country. The Governor was addressing prize distribution ceremony at the Sarojini Naidu Girls Higher Secondary School. Smt. Patel said that it is not sufficient to save girls, it is important to pay more attention to their health also. For this health camps should be organised and complete health check-ups should be conducted in schools. The Governor said that efforts should also be made to increase the non academic knowledge of girls by organizing cultural and other programmes and activities along with academics. In addition, they should be taken on visits to tourist spots and historical places of the state. The girls should be encouraged to conduct programmes organized in schools so that it boosts their morale and they learn something new. School Education Minister Kunwar Vijay Shah said that girls are the future of our country. The progress and social development of the state and the country rests on their shoulders. Some of them will serve the society and the country as doctors and engineers. He said that in future books will be presented to guests to welcome them. A new shed will be constructed in the school premises from the new session. Children should say ‘Jai-Hind’ to register their presence in class so that they developed feeling of patriotism in them. Minister of State for School Education, Deepak Joshi said that the Chief Minister has introduced several schemes for meritorious girl students. Now the girls having 70 percent marks will be given laptop. The Governor released the souvenir of the school on this occasion. Secretary, School Education Ashok Bhargav proposed the vote of thanks.