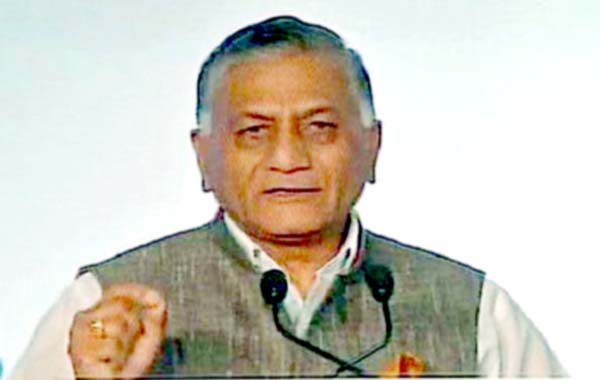 New Delhi, For the first time in last two months since the Imran Khan government took charge in Pakistan, the Indian government has made a very categorical and skeptical statement about the dispensation there. "I don't know...," Minister of State for External Affairs Gen (Retd) V K Singh told reporters on the sidelines of a function here. Gen Singh was specifically asked if there was 'any change' in new Pakistan government's policy towards India or all issues concerning terrorism and Jammu and Kashmir. "After all the question is....it (the new dispensation in Pakistan) has been propped up by the Army. Let's wait and watch.....I mean whether he still remains under (Pak) army control or does not remain under its control," he said. This is first time a Minister - of course a junior one but attached to the Ministry of External Affairs - has made so categorical statement expressing reservation on whether things have really changed in Pakistan. Notwithstanding repeated utterances by the Pakistani leaders under Imran Khan willing to talk to India, the top sources in New Delhi have remained skeptical. On September 13, Pakistan government said it is ready for talks with India and it is awaiting an official response from the Narendra Modi government on how to move forward on the issue. "We are ready for talks with India. We have also conveyed our position to the international community. It remains for India to respond," Foreign Office spokesman Dr Mohammad Faisal said in Islamabad during the weekly media briefing. "We are also saying since long that dialogue is the only way forward to settle all outstanding issues between Pakistan and India. We are officially waiting for a response from India". On July 30, springing a surprise Prime Minister Narendra Modi had called cricket legend Imran Khan, Chairperson of Pakistan Tehreek-e-Insaf party, over phone and congratulated him for his party emerging as the largest political party in the National Assembly of Pakistan. In a statement, the Ministry of External Affairs said in Delhi that the Prime Minister expressed "hope that democracy will take deeper roots in Pakistan". "The Prime Minister also reiterated his vision of peace and development in the entire neighborhood," the MEA statement has said. Congress leader and Punjab Minister Navjot Singh Sidhu has been strongly advocating for re-starting the talks but the BJP response to such suggestions did not quite evoke same enthusiasm. BJP spokesman Sambit Patra once wanted to know why Mr Sidhu was trying to run India's foreign policy and also why the Congress party seemed to have opened a 'Pakistan desk'.