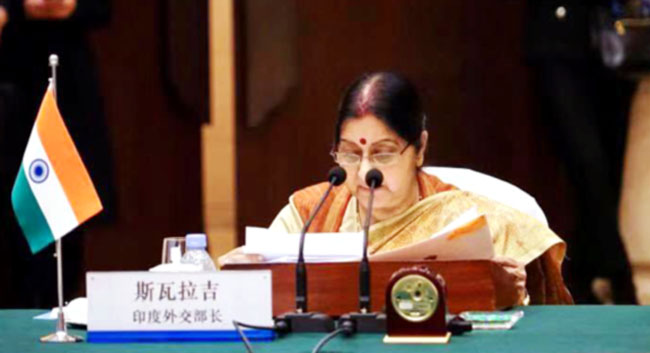 Wuzhen, (China), In a major boost to India's ongoing and persistent diplomatic efforts, China and Russia on Wednesday agreed to Indian External Affairs Minister Sushma Swaraj's argument that terrorism challenge today required a global level cooperation. In what seen as a 'gain and endorsement of its stance' in strategic parlance, the Joint Statement issued at the end of RIC Foreign Ministers meeting here said that "the common development and close cooperation of the three countries - Russia, India and China - is conducive for world peace and stability and promoting global growth". "We agreed to jointly combat all forms terrorism through closer policy coordination and it is especially important to eradicate the breeding grounds of terrorism and extremism," Chinese Foreign Minister Wang Yi said summing up the discussions on terrorism. The mention of the "breeding grounds" of terrorism is largely seen as endorsement of India's stance specially in the backdrop of the February 14 Pulwama terrorist attack and the second surgical strike carried out by Indian Air Force on Tuesday. India had carried a surgical strike in 2016 after Uri attack too. For her part, Ms Swaraj at the end of the meeting said, "We have agreed that the UN-led Global Counter Terrorism mechanism be set up and it was also agreed that India-proposed Comprehensive Convention on International Terrorism be also finalised and adopted at the earliest". The Joint Statement said the three foreign ministers "reiterated the importance they attached to the Russia-India-China trilateral format as a platform to foster closer dialogue and practical cooperation in identified areas". "As countries with significant international and regional influence, the three countries stand ready to expand mutual consultations and cooperation on international and regional issues of mutual interest in the spirit of mutual respect, respect for sovereignty, non-interference in internal affairs, unity, mutual understanding and trust". "The common development and close cooperation of the three countries is conducive for world peace and stability and promoting global growth," it said. The RIC statement comes close on the heels of the US Secretary of State Michael Pompeo taking to its Foreign Minister Shah Mahmood Qureshi and urging that Islamabad should take meaningful action against terror groups. "I spoke to Pakistan Foreign Minister Qureshi to underscore the priority of de-escalating current tensions by military action, and the urgency of Pakistan taking meaningful action against terrorist groups operating in its soil," Mr Pompeo said in a statement in Washington. India on Tuesday bombed and destroyed JeM's biggest training camp in Balakot in a first major cross border exercise in last five decades in which "very large number" of terrorists, trainers and senior commanders were eliminated. However at the media briefing, the Chinese foreign minister took a cautious lie and said "....we believe that Pakistan has always been opposed to terrorism". He, nevertheless maintained: "China, Russia and India have reaffirmed our strong opposition to terrorism in various forms and manifestations". Answering a question on whether there were differences between India and China, Ms Swaraj said "As far as the joint strategy is concerned, you just heard foreign minister Wang Yi's speech. What he said during his concluding statement, he reiterated here and he said that we would cooperate on eradicating the breeding grounds of terrorism". "This is not only a common strategy for the three of us, but it is resolution for the three of us. Wang Yi said this during his concluding remarks and reiterated it here," Ms Swaraj emphasised. "Terrorism is a threat to the humanity that is why not only for our three countries, we also need a global strategy. We need global cooperation," she said. "Regarding Pulwama, I just told you both during my bilateral meeting with Wang Yi and also in the trilateral platform I strongly put forth India's perspective," she said. In her speech at the RIC Ministers meet, External Affairs Minister assured the international community that India "does not wish to see" further escalation of the situation. "Excellencies, this was not a military operation, no military installations were targeted. The limited objective of the preemptive strike was to act decisively against terrorist infrastructure of JeM. India doesn't wish to see further escalation of the situation. India continues to act with responsibility and restraint," she said. She said it was only after Pakistan's 'continuing refusal' to acknowledge the role of Jaish-e-Mohammad that the Government of India decided to take preemptive action. "....the target was selected and the largest terror camp in order to avoid civilian casualties," she said.