In cyber warfare, enemy can be combated through knowledge: Naidu 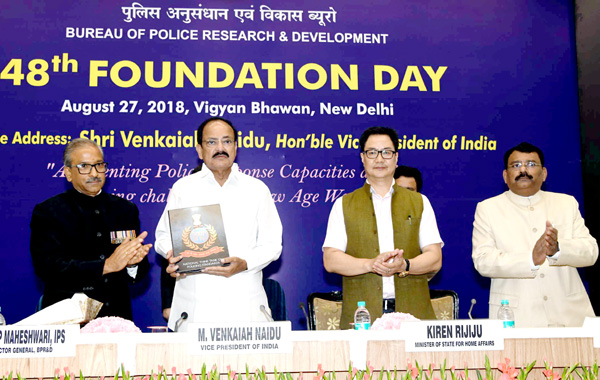 New Delhi, In the era of New Age cyber warfare, the new enemy can be combated only through the power of knowledge, Vice-President M Venkaiah Naidu cautioned on Monday. Addressing a gathering on the 48th foundation day of Bureau of Police Research and Development (BPR&D) here, he said cyber attacks took place with hackers working over the Internet thousands of miles away and asked police to be equipped to handle attacks that jeopardise national security. He asked the BPR&D to evolve best practices, policies and procedures in policing to combat emerging new age national security threats. The Vice-President stressed that knowledge and competence of the police forces and the 'ability to innovate, improvise and implement' will be critical in strengthening national security. 'We need a “Surakshit Bharat” as much as a “Samruddh Bharat” and we cannot have a “Surakshit Bharat” without a “Saksham Bharat”,' he pointed out. On counter measures, Mr Naidu said the Indian government had taken various steps to prevent cyber attacks and underlined the need to augment police response capacities. 'The set up for combating the new enemy in cyber space can no longer be housed within the walls of a seemingly secure single government agency,' he added. The Vice-President called for a reorientation of the existing paradigm and said all security agencies must work in close coordination and also with the private sector manning to establish a foolproof ecosystem. The Government and private sector must establish joint mechanisms to protect the police force against the future challenges, including, the threats of modern warfare. All police forces of the country have to equip themselves with the cyber forensic techniques and knowledge to counter a cyber-attack or investigate a cyber-crime, he added. Minister of State for Home Affairs Kiren Rijiju and other dignitaries were present on the occasion.