In next flight b/w Delhi and Mumbai, do look for ‘Statue of Unity': PM Modi 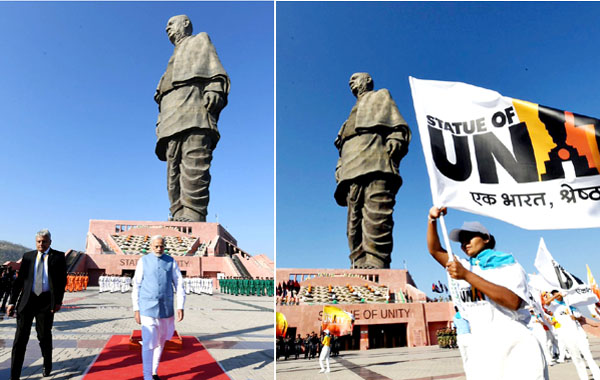 New Delhi, Prime Minister Narendra Modi on Friday advised air travelers between Mumbai and the national capital to "try to spot the Statue of Unity' erected in honour of Sardar Vallabhbhai Patel when they fly next. "Some friends told me that the Statue can also be seen during Delhi-Mumbai flights. So, next time you are flying that route do try to spot the Statue," Mr Modi tweeted. He wrote: " I would specially urge you all to visit Kevadia and see the Statue of Unity ". On a day-long visit to his native state, Prime Minister paid tributes to the "great Sardar Patel"  at the Statue of Unity, which was unveiled on October 31 by Mr Modi. "As India’s Home Minister, his (Sardar Patel's) contribution towards building the framework of our security systems is immense," Prime Minister wrote in the micro blogging site. The statue depicts Vallabhbhai Patel, freedom fighter and country's Deputy Prime Minister and Home Minister, who is credited for the unification of hundreds of princely states to form the modern political boundary of India. It is the world's tallest statue with a height of 182 metres (597 ft). It is located on a river island facing the Sardar Sarovar Dam on the river Narmada in Kevadia, about 100 kilometres from Vadodara.