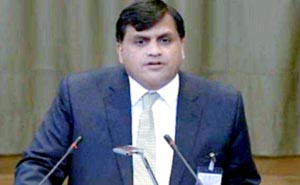 Islamabad, Pakistan on Friday made a strong pitch for peace with India as it joined the rest of the world and global leaders in paying tribute to Bharat Ratna Atal Bihari Vajpayee. Dr Mohammad Faisal, spokesman in Pakistan foreign ministry, took to Twitter and shared few lines of the poem penned by the poet-politician Vajpayee himself. "Jang na hone denge....Bharat Pakistan padosi, saath-saath rehna hai, ..... ...Jo hum par guzari, bachchon par na hone denge, Jang na hone denge (We will not allow any war...India and Pakistan will co-exist, have to co-exist....What we have gone through, we will not let that menace pass on to the younger generation. We will not allow any war to happen)," he tweeted. Vajpayee's 'Jang Na Hone denge' poem figures in the compendium 'Meri Ikkawan Kavitayen'. Dr Faisal also wrote saying Pakistan's acting Information and Law Minister Barrister Ali Zafar will lead Pakistan delegation to participate in the funeral of Late Vajpayee. A new dispensation headed by cricket icon Imran Khan will take over the reins of governance in Pakistan on Saturday. In a rare gesture Indian ambassador in Pakistan Ajay Bisaria on August 15 made a strong case for both countries to move towards a "new direction" to achieve a "new future which will be different from the past 71 years". "India is dealing with the rest of the world with underlining philosophy of Vasudeva Kutumbakam....which means the world is one family," Mr Bisaria has said in Islamabad. On this backdrop, he underlined both sides need to "......go forward with hope that we we develop prosperous South Asia, a peaceful South Asia - free of violence and that we (both countries) move towards a new direction".