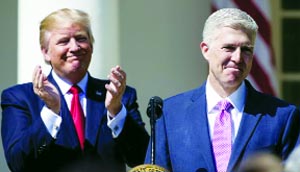 Agencies, Washington, With a second Supreme Court pick less than 18 months into his presidency, Donald Trump is poised to cement conservative control of the court and fire up supporters eager for a rightward shift on divisive social issues. Shortly after Justice Anthony Kennedy announced his retirement on Wednesday, White House officials said Trump had an opportunity to shape U.S. justice for decades to come. “It will further his agenda of remaking the courts,” said one senior White House official. “This is a legacy.” Speaking of the selection at a rally in North Dakota on Wednesday night, Trump said: “We have to pick a great one. We have to pick one that’s going to be there for 40 years, 45 years.” Kennedy’s replacement could be pivotal in paring back abortion rights, potentially even challenging the Supreme Court’s landmark Roe v. Wade ruling in 1973 that gave women a constitutional right to obtain the procedure. Undoing or at least putting more limits on that ruling has been a dream of conservative activists and contributed to conservative Christian support for Trump that helped him win the presidency in 2016. Although Kennedy was a conservative nominated by Republican President Ronald Reagan, he was seen as the “swing vote” on the court because he joined with liberal justices on some major issues, including expanding gay rights and upholding abortion rights. By picking a social conservative to replace Kennedy, Trump would have a reliable 5-4 majority on the Supreme Court, even on some of those hot-button social issues. While Trump did not make rolling back abortion rights a central plank of his campaign, many of the conservative rank and file want Roe v. Wade overturned and Trump promised to put anti-abortion justices on the Supreme Court. But picking an ultra-conservative as his nominee would carry risk because Trump would have to rely on some moderate Republicans to win approval in the U.S. Senate, where his fellow Republicans have a narrow majority. White House officials said Trump was likely to quickly begin interviewing candidates from a list of 25 people that the conservative Federalist Society helped draw up, with an eye to getting the new justice confirmed by the Senate in the autumn. They believe the timing could help Trump boost conservative voters’ enthusiasm and turnout at congressional elections in November. Republicans are fighting to maintain control of both houses of Congress, with opinion polls showing Democrats have a strong chance of winning back the House of Representatives. “Any time you’re in a midterm election year, you’re going to have a concern about whether your base will turn out,” said one official. “A high-profile Supreme Court battle will certainly remind all your voters what is at stake.”