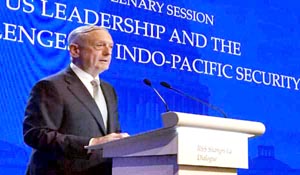 Singapore, The US sees India as a "responsible steward" in the Indo-Pacific region, and values the role New Delhi can play in regional and global security, Defence Secretary James Mattis said on Saturday. Mattiis said the US is strengthening its partnership with India, as its strategic interests converge with that of the South Asian country. "In South Asia we are strengthening our partnerships, particularly with India. Prime Minister Modi's remarks last evening underscored India's role as a leader and responsible steward in the Indo-Pacific region," he said at the Shangri-La Dialogue, the annual security meet in Singapore. "The U.S. values the role India can play in regional and global security, and we view the U.S.-India relationship as a natural partnership between the world's two largest democracies, based on a convergence of strategic interests, shared values, and respect for a rule-based international order." The Trump administration has made "a free and open Indo-Pacific" — a term replacing the more widely used "Asia Pacific" label to acknowledge a role played by India . And in a symbolic move recognizing the growing importance of the Indian Ocean, the US military on Wednesday renamed its Pacific Command the Indo-Pacific Command. Mattis said the US' regional cooperation is growing in a range of areas, consistent with these shared objectives. "Our partnership extends beyond the Indo-Pacific region, and we welcome India's continued significant contributions to stability reconstruction in Afghanistan." During a subsequent question and answer session after the speech, Matttis said India is a stabilising force and is operating in the best interest of the region and the world, "as they try to help through development funds to remove the root causes of why young men pick up guns... "And so I like what India's doing there. I support it. I think we need more education and less fighting in the world, and I see India foremost in this effort in Afghanistan."