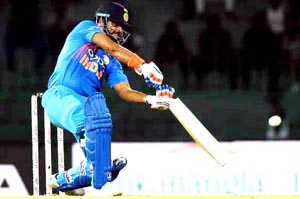 Agencies, Colombo Shikhar Dhawan slammed his second fifty of the series while bowlers also came to the fore as India registered a comprehensive six-wicket win over Bangladesh in their second match of the Nidahas Trophy, at the R. Premadasa Stadium in Colombo on Thursday. India restricted Bangladesh to 139/8 and then chased down the target with six wickets and 1.2 overs to spare.Opener Shikhar Dhawan (55) hit a half-century in his second consecutive game while being supported by Suresh Raina and Manish Pandey. Earlier, India’s young bowling unit got its bearings back with a disciplined effort to restrict Bangladesh to a modest 139/8. After a nightmarish effort against hosts Sri Lanka in the opener, the inexperienced line-up gave a much better account of themselves, using the conditions well, much to the delight of their skipper Rohit Sharma.The testimony to a better performance was as many as 55 dot balls (9.1 overs) being bowled by the ‘Men in Blue’. On a slow Premadasa track, all-rounder Vijay Shankar’s (2/32 in 4 overs) wicket-to-wicket stuff proved to be handy even though he had at least three catches dropped off his bowling.Jaydev Unadkat (3/38) had most number of wickets but he was inconsistent throughout his four-over spell with a mixture of good deliveries followed by half trackers. Skipper Rohit once again started with off-spinner Washington Sundar (0/23 in 4 overs) and the normally dangerous Tamim Iqbal (15, 16 balls) found it difficult to get going in the Powerplay overs. Sundar bowled as many as 13 dot balls in those first six overs.His partner Soumya Sarkar (14, 12 balls) flicked Unadkat over long-leg for a six but the Saurashtra left-armer had the last laugh when he was caught at short fine-leg trying to whip a rising delivery. Tamim’s misery was ended by a well-disguised short-ball from Shardul Thakur (1/25 in 4 overs), which climbed on him sharply.His mistimed pull-shot was taken easily by Unadkat at short fine-leg. Liton Das (34, 30 balls) and former skipper Mushfiqur Rahim (18) added 31 runs for the third wicket.Rahim in fact, started with a switch hit sweep and a conventional slog sweep off Yuzvendra Chahal (1/19 in 4 overs), who didn’t bowl too many boundary balls after that.Shankar, playing his second international game, impressed every one by hitting the right length time and again. The lack of pace in his bowling, was managed well by managing to hit the good length spot with Suresh Raina dropping a dolly to give Liton a reprieve. The ball stopped on him and climbed up. It was an easy skier went abegging with Raina running from mid-off dropped it. Liton once again got lucky as another Shankar bouncer saw him try to clear the deep fine leg but Chahal running in-front spilled the catch.However in his next over,Shankar got his first international wicket when Mushfiqur edged one to Dinesh Karthik behind the stumps. Skipper Mahmudullah (1, 8 balls)was frustrated by Chahal’s variations and in his desperate bid tried to hit Shankar inside out gave an easy catch to Shardul at sweeper cover boundary.Liton couldn’t utilise the chances that he got as Chahal enticed him with a flighted delivery as Raina took a simple catch at long-off. Shankar was again unlucky in his final over, when he sprinted around 35 metres towards vacant on side trying to latch onto a catch off his own bowling. The batsman in question was Shabbir Rahaman (30, 26 balls), whose lusty blows towards the end gave Bangaldesh’s total, a semblance of respectability.