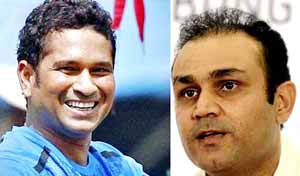 New Delhi, Former cricketing greats Sachin Tendulkar and Virender Sehwag applauded India on twitter after they beat Pakistan by 203 runs in the ICC U-19 Cricket World Cup at Christchurch in the sem-finals on Tuesday. "Quality play with great dominance in all departments. Splendid display! Good luck for the finals," Tendulkar tweeted. Virender Sehwag who is known for his rib-tickling tweets took on twitter tweeting "That was brutal. What a win for our boys, thoroughly out playing Pakistan. Best wishes for the finals #INDvsPAK #U19WorldCup" "Far superior performance than any side in the tournament. Congrats #TeamIndia. Just one step away from a huge milestone. The opportunity to play in a world cup final does not come everyday.. so, make the most of it," Raina tweeted. BCCI also took to twitter "Well played #IndiaU19. Brilliant team effort and now one step closer to the World Cup #U19WC #INDvPAK #ICCU19WorldCup." India now face three-time winners Australia on Saturday in the finals.