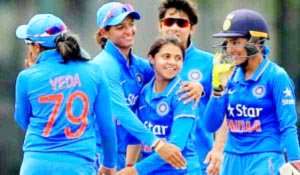 Kuala Lumpur,  An unbeaten 29 by Veda Krishnamurthy and 2/20 by Ekta Bisht helped India beat Sri Lanka by seven wickets in the Women's T20 Asia Cup here on Thursday. Chasing a small target of 108 for victory, India were helped by contributions at the top from Mithali Raj (23) and Harmanpreet Kaur (24). The duo added 34 runs for the second wicket after India lost Smriti Mandhana (12) early.Along the way, Raj became the first Indian woman to go past 2000 T20I runs. When Raj and Kaur were dismissed, the scorecard read 70/3 in 13.3 overs and India still needed 38 runs from 39 balls. That equation was solved easily by Krishnamurthy and Anuja Patil (19) in an unbeaten 40-run stand for the fourth wicket. India finished on 110/3 in 18.5 overs. Udeshika Prabodhani, Oshadi Ranasinghe and Nilakshi de Silva picked up one wicket each for Sri Lanka. Earlier, Sri Lanka chose to bat, but Ekta Bisht, the left-arm spinner, got opener Nipuni Hansika stumped in the fourth over to give her side an early breakthrough at 12/1.Hasini Perera added 38 with Yasoda Mendis to take Sri Lanka to the 50-run mark Another stumping, this time of Mendis (27) off Poonam Yadav reduced Sri Lanka to 50/2, and that soon became 67/3 when Bisht trapped de Silva lbw for 7. The third wicket escalated a mini-collapse for the Lankans. Thanks to some smart fielding from the Indians, they lost their next three wickets for 22 runs and were in trouble at 89/6 in the 17th over. Perera remained unbeaten, adding some runs with the tailenders to take Sri Lanka's score past 100. Apart from Bisht, Jhulan Goswami, Patil and Poonam Yadav returned one wicket each. With this victory, India, who were shocked by Bangladesh in their previous game, retain their position at the top of the table with six points from four games. Pakistan and Bangladesh too are on the same number of points. India play Pakistan next on June 9 while Sri Lanka square off against Thailand.