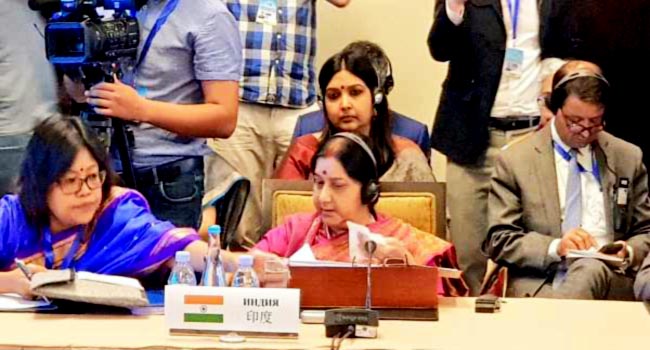 Bishkek, India stressed once more on Wednesday that it is firmly opposed to unilateralism and protectionism in global trade, and called for a rules-based, open and inclusive multilateral trading system, centred around the World Trade Organization. "India firmly believes in the efficacy of multilateralism," External Affairs Minister Sushma Swaraj told her counterparts from the Shanghai Cooperation Organzation, as a trade war between the US and China rages and some developed countries resort to unilateralism to resolve trade disputes. India, she said, subscribed to a rules-based, transparent, non-discriminatory, open and inclusive multilateral trading system, centred around the WTO, and firmly opposed to unilateralism and protectionism. Swaraj said India is committed to continue working for a favourable environment for SCO member countries' economic activities and to intensify work on the relevant SCO documents dealing with economic and trade cooperation. In this context, she said, science and technology led innovation and the digital economy are the key areas, which could play an important role in the long-term inclusive and sustainable growth. The minister reiterated India’s commitment to regional connectivity and referred the country's involvement in the International North-South Transport Corridor; Chabahar Port; Ashgabat Agreement; and India-Myanmar-Thailand Trilateral Highway. "We welcome regional connectivity initiatives, that are inclusive, sustainable, transparent and respect the principles of sovereignty and territorial integrity," she said, reminding the audience that air freight corridors between Kabul and Kandahar and New Delhi and Mumbai were operationalised in 2017. At the same vein, she said New Delhi would strengthen cooperation with other SCO members to combat terrorism. "Our heart goes out to our brothers and sisters of Sri Lanka, who have recently witnessed the ghastly act of terrorism.Our wounds of Pulwama attack were still raw and the news from the neighborhood has made us more determined to fight firmly resolutely against this menace," she said. India, the minister said, is determined to consistently strengthen cooperation within the SCO framework for comprehensive, cooperative and sustainable security. "We would be open to ideas on how we can make the work of RATS ( Regional Anti-Terrorist Structure) more effective in this regard." Swaraj also said India is committed to securing peace and security in war-torn Afghanistan. "India stands committed to any process, which can help Afghanistan emerge as a united, peaceful, secure, stable, inclusive and economically vibrant nation, with guaranteed gender and human rights. I wish to once again underscore the importance India attaches to SCO Afghanistan Contact Group and welcome an early conclusion of the Draft Roadmap of further actions of the Contact Group."