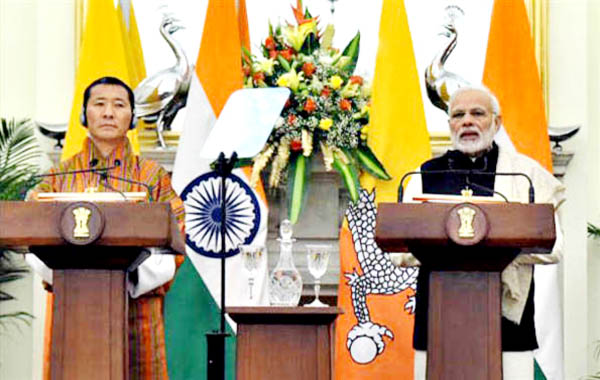 New Delhi, India and Bhutan decided on Friday to expedite all hydro-power projects and voiced happiness over the progress of the 720-MW Mangde-Chhu project following agreement over its electricity export tariff. "This is a matter of happiness that the work on the Mangde-Chhu project is going to be completed soon. We now have agreement also on the tariff of this project," said Prime Minister Narendra Modi after talks here with his Bhutanese counterpart LotayTshering. "Work on other projects is also making satisfactory progress and we both want to further expedite all the other projects," Modi said. The inauguration of Mangde-Chhu project, expected next month, is planned as one of the major events of the golden jubilee celebrations of diplomatic relations between the two countries. The Bhutanese premier appreciated India's support during the negotiations for tariff of the Mangdechhu project and expressed the hope that work on the 2,560-MW Sunkosh project will start soon. Tshering, Tshering, who led his Druk Nyamrup Tshogpa party to victory in the October 18 election, winning 30 of the 47 seats of the Bhutanese national assembly, invited Modi to visit Bhutan and inaugurate the Mangdechhu project. Tshering had earlier said that the tariff rate is important for the country's 12th Plan (2018-23), as it would form a big component of the internal revenue to support developmental activities.The tariff rate of the project is closely tied to the revenue available for country in the Plan. Power is Thimphu’s single largest export item. Bhutan is supplying about 5,045 MW of power to India every year.The commissioning of Mangdechhu project would be one of the biggest earning hydropower projects for Bhutan.Hydro-power projects and cross-border power trading constitute an important part of India-Bhutan ties in recent years and the two side reviewed all projects. India has set up three hydro-power projects in Bhutan with a total capacity of 1,416 MW, which are operational. About three-fourth of the power generated is exported to India and the rest is used for domestic consumption. "Today we reviewed our aid for all related projects in this important sector," said Modi. Ahead of Tshering's visit, India has amended the 2016 cross-border power trading rules to ease Bhutan's ability to sell power to India.