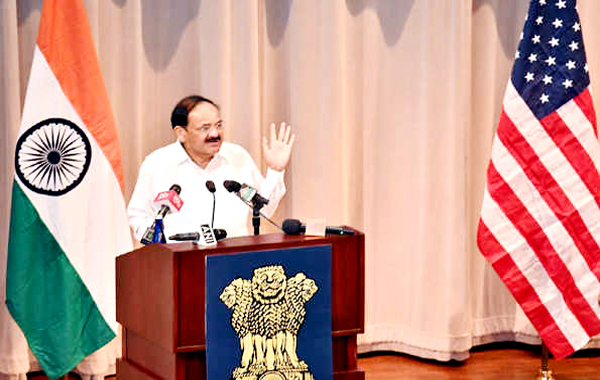 Chicago, In a world of unprecedented changes, India can provide a sheet anchor and a spiritual compass, Vice President M Venkaiah Naidu has said. Delivering the valedictory address of the 2nd World Hindu Conference 2018 in commemoration of the 125th year of Swami Vivekananda’s address, Mr Naidu stated that in a world filled with bitterness, India could provide 'honey of wisdom gathered from different flowers by different bees'. Asserting that the invaluable heritage of India was true nationalism, he said preserving the invaluable heritage of India was true nationalism and with its knowledge and wisdom India could provide honey of wisdom in the bitter world. The Vice President described Swami Vivekananda as 'an embodiment of Hindu culture', saying his messages were relevant till today and reverberated across India. The World Hindu Conference 2018 is being held in Chicago, US, in commemoration of 125th year of Swami Vivekananda’s address at Parliament of the World's Religions held in 1893. The Vice President said that preserving the invaluable heritage of India was true nationalism and said that with its knowledge and wisdom India could provide honey of wisdom in the bitter world. Indians had inherited a treasure house of ideas, values and attitudes. 'The Parliament of the World's Religions emerged as a celebration of the rich diversity in religious and cultural beliefs around the world and brought the world together to understand different world views,' he further said,adding that it deepened appreciation of the common quest for peace and harmony that human beings have been engaged in from time immemorial. Swami Vivekananda’s addresses at this Parliament have had an incredibly influential, he noted. The unequivocal messages of tolerance, acceptance, unity and plurality of love, compassion, service, charity,gender equality, poverty alleviation and protection of the environment that exponents like Swami Vivekananda had spread across the world embody timeless values that are more relevant today than ever before. 'We should ensure that these values are further reinforced through behaviour and action, as Swamiji said, by ‘being’ and ‘becoming’, he pointed out. India, too, was also moving on an ambitious reform agenda that sought to transform people’s lives, he said and at this juncture, 'the values we all cherish, as Indians, can be the guideposts for our individual growth and collective advancement.' Meanwhile, the Vice President held a bilateral meeting with his Surinamese counterpart Adhin Ashwin on the sidelines of the World Hindu Congress and discussed issues of mutual interest. US Congressmen Bill Foster and Peter Roskam called on Mr Naidu and shared their appreciation of the progress in Indo-US relationship as well as the common understanding on many issues of contemporary relevance. Twelve CEOs of various companies in Chicago met the Vice President and shared their experiences. The Vice President gave an overview of the policies and administrative reforms in India, especially those facilitating ease of doing business, an official release here said.