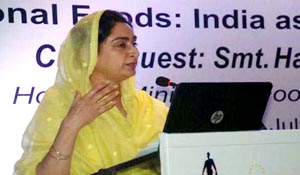 New Delhi, Food Processing minister Harsimrat Kaur Badal on Thursday said India was capable of supplying the growing need of foods for the world population that is on a rising track. Speaking at a conference organised here by Indo-dutch Chamber of Commerce and Sciences, Ms Badal said India can become a world food factory. Expressing concern over damaging of crops post harvesting, she said such losses can be tackled by tech-based interventions. She said the government was making all efforts to boost food processing industry in the country and a special fund has been created for it. "The government has inked an agreement with some countries worth $ 4 trillion to create an infrastructure for the food processing industry in the country," she said. Speaking on the occasion, The Netherlands Ambassador to India Alphonsus Stoelinga assured to give all support to the Indian government in its endeavour to ensure food security.