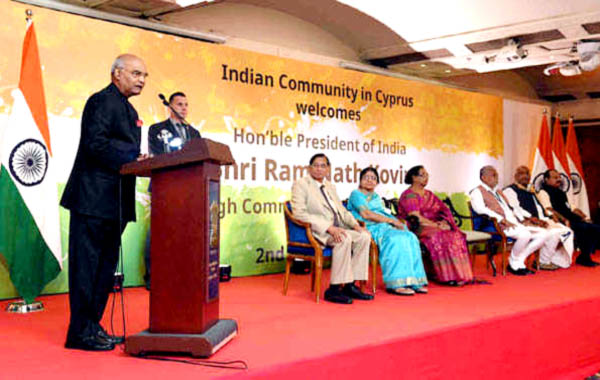 Larnaca (Cyprus), President Ram Nath Kovind on Monday expressed hope that the signing of MoU between India and Cyprus on money laundering will go a long way in creating a "cleaner economy". "India is striving to create a cleaner economy. This is both a domestic and a global problem. In this context, the agreement signed earlier today between the Financial Intelligence Unit of India and the Unit for Combating Money Laundering of Cyprus will be useful for both of us," President said in his address at the House of Representatives of Cyprus. President also said India has called for finalising the Comprehensive Convention on International Terrorism at the United Nations and maintained that India will be counting on the support from Cyprus. "We count on your support. I would also like to thank Cyprus for its unstinted backing of India’s candidature for an expanded UN Security Council as well as for the Nuclear Suppliers’ Group," he said. Dwelling at certain measures taken by Indian government back home, Mr Kovind said the "tax reforms to galvanise" India’s wide-spread manufacturing and business capacities and large domestic market have also helped. "The implementation of the Goods and Services Tax has led to uniform, simpler and digitally-enabled taxation in all of our 29 states. It has integrated the country into one business system," he said. This, President said, is a historic achievement that "can be compared to bringing the European Union into a common fiscal framework". "There have been other measures too. The enactment of the Insolvency and Bankruptcy Code has made it easier for non-performing businesses to exit," he said. Recalling deep and historic relationship between two countries, Mr Kovind said - "In India, we fondly remember that about 50 years ago Cyprus issued two postage stamps to commemorate Mahatma Gandhi’s birth centenary. These stamps are still cherished by collectors. It is a fine coincidence that my current visit is taking place only a few weeks before October 2nd, when we begin the two-year celebrations of the 150th birth anniversary of Mahatma Gandhi". "Figures like Gandhiji and Archbishop Makarios don’t belong to any one country. They are part of the heritage of humanity," said Mr Kovind paying tributes to Makarios III. Makarios III was a Greek Cypriot clergyman and a politician, who served as the Archbishop and Primate of the Church of Cyprus between 1950 and1977). He was the first President of Cyprus from 1960–1977) and in his three terms as President he survived four assassination attempts and a move for a coup. President Kovind also said that as a responsible nation-states, both Cyprus and India are alive to the challenges in the international system. "As civilisations, we have been open societies and trading economies for millennia. The continued relevance of a rules-based international order, for trade, for our sea lanes and the global maritime commons, and in other domains is an article of faith for us," he said.