India expected to become a 5 trillion economy in next 8-9 years: Suresh Prabhu 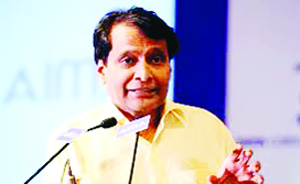 Agencies, New Delhi Suresh Prabhu, Minister of Commerce and Industry said on Wednesday that India is expected to become a 5 trillion dollar economy in the next 8-9 years with the manufacturing sector alone contributing 20 percent to that. Speaking at the 12th India Digital Summit, organised by the Internet and Mobile Association of India (IAMAI), he said, “Therefore we are preparing a detailed plan what will be going in that manufacturing.” Mr Prabhu said that experts who are involved in manufacturing are preparing the roadmap and including all sectors where manufacturing can be promoted. The minister said if manufacturing alone is digitised it will create a huge opportunity for technology firms. He also mentioned that he is currently working on a strategy for international trade which will contribute USD 2 trillion to the economy where the contribution can come from both manufacturing and services. “India is not only bridging digital divide but also helping people scale up their income,” Mr Prabhu said. Earlier, in his address to the delegates, Amitabh Kant, CEO of Niti Aayog said that every Indian will have a smartphone in the next five years He said that this was a period of huge technology disruption in the country. “Today, 85 percent of the devices are still unconnected. Therefore, there is a huge opportunity in the Internet of Things (IoT) space. The opportunity would be in the range of $70 billion by 2025,” he said. According to Mr Kant, Artificial Intelligence (AI) alone will generate the opportunity to the tune of $32 billion. “Advanced robotics are already handling 25 per cent of the jobs. This will rise to 45 per cent in the coming years. India is already ranked globally as the most active Internet user globally on a monthly basis. The Digital transaction will touch 100 trillion dollar in the next 10 years,” he told the audience. Mr Kant further said that with 99 percent Aadhaar penetration and bank account opened under Jan Dhan Yojana, the scope was immense for the FinTech industry.Earlier, Rajan Anandan, Chairman, IAMAI & Vice President, Google India & South-East Asia delivering the inaugural address said that it is an exciting time for internet in India. Availability of very low cost high speed mobile Internet connection in 2017 moved a slow speed nation to a high speed nation.He also expressed hope that the next set of unicorns in India will not just be a unicorn but will be profitable.