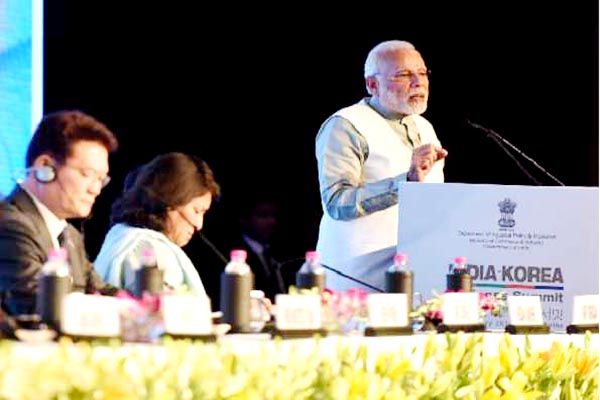 New Delhi, Asserting that there is much in common between India and Korea, Prime Minister Narendra Modi on Tuesday said he has immense admiration for the entrepreneurship zeal of the Korean people and pointed out that the partnership between the two countries can go a long way in promoting regional growth, stability and prosperity in Asia. "India and Korea have so much in common......Our partnership has great potential to promote regional growth, stability and prosperity in Asia," Mr Modi said addressing India-Korea Business Summit here. "I admire the spirit of entrepreneurship of the Korean people. I admire the way in which they have created and sustained their global brands. From IT and Electronics to Automobile and Steel, Korea has given exemplary products to the world," he said. Similarly, he said India is also working with the mission of Transforming India from- "an old civilisation into a modern society, from an informal economy into a formal economy". Between the two countries, he said there is an overwhelming scope for cooperation in sectors like housing, smart cities, railways, transportation, sea ports, energy including renewables and IT infrastructure. The Prime Minister said a need for a hand-holding agency was felt during his visit to Korea and thus 'Korea Plus' was formed in June 2016. "Korea Plus has facilitated more than 100 Korean investors in just two years. This shows our commitment towards welcoming Korean people, companies, ideas and investments," Mr Modi said. On the Indian economy, he said, "We are already the third-largest economy by purchasing power. Very soon, we will become the world's fifth-largest economy by nominal GDP. We are also the fastest growing major economy of the world today". Mr Modi said the government of India is already on a de-regulation and de-licensing drive. "Validity period of industrial licenses has been increased from three years to fifteen years and more," Prime Minister said. "We have worked towards creating a stable business environment, removing arbitrariness in decision making. We seek positivity in day-to-day transactions," Mr Modi said. Pointing out that India offers unique opportunities for investment wherein there are virtues of a growing market and also prevailing democratic values. "You see around the globe, there are very few countries where you have three important factors of economy together. They are: Democracy, Demography and Demand. In India, we have all the three together," Mr Modi said.